Nord Stream: a fourth leak identified in the Baltic Sea 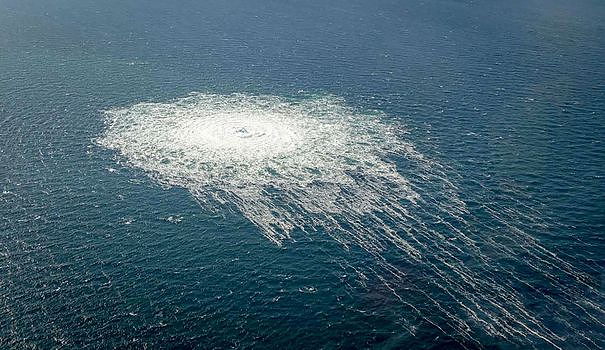 The fourth leak is located northeast of the island of Bornholm above the Nord Stream 2 gas pipeline, the coast guards then specified in a press release.

So far the authorities of Denmark and Sweden had reported a leak on the Swedish side and two leaks on the Danish side on these gas pipelines linking Russia to Germany, targeted by a very likely sabotage with worldwide repercussions.

According to two suspicious explosions that took place on Monday morning and evening according to several seismological institutes, these are in international waters off the Danish island of Bornholm but in the respective exclusive economic zones of the two Scandinavian countries.

The Swedish coast guard say they have been aware of this new leak since Tuesday but could not immediately specify why it was not reported until late.

The two leaks on the Swedish side are located in the same area at a distance of one nautical mile (1.8 km), they said, and the leak on the Danish side is itself 2.6 miles (4.6 kilometers) away. .

The vast leaks cause significant marine bubbling several hundred meters wide on the surface which makes it impossible to immediately inspect the works, according to the authorities.

A Swedish coast guard vessel specializing in pollution clearance is in the area with a remotely controlled underwater vehicle, as are Danish vessels.

"According to the crew, the flow of gas visible on the surface is always constant", writes the authority.

Not operational at the time of the events due to the consequences of the war in Ukraine, the two gas pipelines were still filled with gas for technical reasons.

According to Denmark, it is impossible to stop the leaks and the large quantities of methane should continue to escape into the atmosphere by Sunday, when the pipes will be emptied.

The object of all suspicion after the alleged sabotage of the gas pipelines, Russia counter-attacked on Wednesday, pointing the United States and obtaining a meeting of the Security Council of the United Nations. Washington denounced in return a new operation of "disinformation".