Nobel Prize in Physics: Alain Aspect, father of quantum entanglement and mentor of a generation

"We have all been waiting for it for a long time! We are very proud", welcomed AFP the Minister of Research Sylvie Retailleau who knew the winner as a physicist. 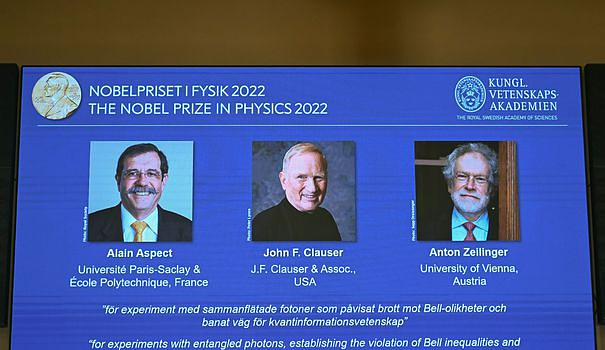 "We have all been waiting for it for a long time! We are very proud", welcomed AFP the Minister of Research Sylvie Retailleau who knew the winner as a physicist.

In 1981, at the Physical Institute of Orsay, Alain Aspect and his team succeeded in entangling for the first time two photons (grains of light) at a distance of 12 meters.

The physicist had just experimentally demonstrated a totally counter-intuitive property of quantum mechanics that governs matter at the microscopic scale: when two particles are entangled, their properties remain connected regardless of the distance separating them. As if linked by an invisible thread.

"What dominates my whole life as a physicist is to have been obsessed with quantum strangeness", explained Alain Aspect to AFP in 2010.

This discovery finally settled, in the laboratory, an old controversy of more than 60 years between Albert Einstein and one of the fathers of quantum physics, the Dane Niels Bohr: the first had predicted entanglement but did not believe in it, the second, yes.

"Bohr wins from a certain point of view. But Einstein wins because he spotted something extraordinary," the French recipient said after his accolade was announced, "impressed and proud" to make the list big names who have "totally changed" quantum.

In an interview with the Nobel Foundation, the researcher called on the international scientific community to remain united in the face of the rise of "nationalism" in the world.

On a practical level, his famous experiment has paved the way for revolutionary technologies such as quantum computing and computing, or ultra-secure communications.

Alain Aspect, son of a teacher born in 1947 in Agen, graduated in 1969 from the Ecole Normale Supérieure in Cachan, was second in the aggregation of physics before becoming a professor at the University of Paris-Saclay and at the Ecole Polytechnique .

Member of the Academy of Sciences, Alain Aspect received numerous awards, including the CNRS gold medal in 2005. Until the most prestigious Monday, alongside the American John Clauser and the Austrian Anton Zeilinger.

"It's fantastic!", Moved Georges-Olivier Reymond, president of Pasqal, a French start-up which is developing a quantum processor, co-founded with Alain Aspect. "Everything I have done in my career is thanks to him."

He remembers the discovery, when he was a student. "Alain Aspect achieved a feat that surprised us all. It was so different from what we learned at school... It inspired generations of students."

Sylvie Retailleau, for her part, welcomed a researcher open to the business world - he is on the scientific council of large groups - who "does fundamental physics at a very high level but goes as far as applications". "He is one of these mentors in physics. It is a whole community that works today under his leadership", commented the minister who directed the University of Paris-Saclay.

"Alain is very paternalistic with his students to whom he knows how to pass on his passion, testifies the president of Pasqal. He is also a bon vivant who can tell you about his foie gras recipes... And I still hear him there 20 years old, telling us with his southwestern accent we must create start-ups in quantum, this is the future.... He was right".

Aged 74, Alain Aspect is married and the father of two children.