Nicaragua: a critical bishop of Ortega "taken by force" by the police

"The national police entered the bishopric of our diocese of Matagalpa and took away "Monsignor Alvarez," his whereabouts are still unknown (. 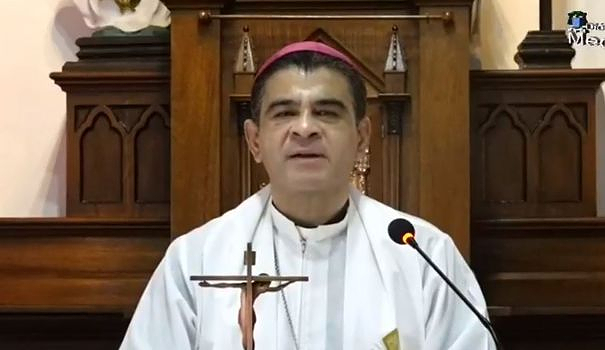 "The national police entered the bishopric of our diocese of Matagalpa and took away "Monsignor Alvarez," his whereabouts are still unknown (...) we are alerting the international community and we are joining the chain of prayer," the Episcopal Council of Latin America and the Caribbean (Celam) said on Twitter.

"They took him by force and we don't know where he is," Vilma Nuñez, president of the Nicaraguan Center for Human Rights (Cenidh), told AFP based on various sources consulted by her organization in Matagalpa.

The authorities have given no information at this stage.

Friday at dawn, the diocese of Matagalpa had itself announced on its Facebook page that "at this moment the national police is entering the bishopric. SOS. Urgent".

"What an outrage, they took Monsignor Rolando Alvarez, as well as the priests who were with him. Enough of so much silence, let those who must speak and show their faces speak, this is called a sin of omission", s' is insurgent on Twitter the Nicaraguan priest Edwing Roman, exiled in Miami.

"What clearly had to happen has happened. This is the arbitrary and abusive detention of Monsignor Alvarez," said human rights defender Pablo Cuevas, also exiled in Miami.

Since August 4, the police have surrounded the bishopric of Matagalpa (north-east), where Bishop Alvarez is forcibly confined with a dozen religious and lay people.

The prelate, 55, said he did not know why the authorities are pursuing him with their vengeance and believes he is being subjected to "house arrest".

"We are in the hands of God," Bishop Alvarez said during Thursday Mass, assuring that God "conquers darkness, injustice (...) makes hell tremble and throws them back into the sea of ​​their own wickedness".

Again on Wednesday, 26 former heads of state and government from Spain and Latin America appealed to Pope Francis, who has so far remained silent, to "stand firmly in defense of the Nicaraguan people and their freedom nun", accusing Daniel Ortega of "primitive dictatorship".

The government has put pressure on the bishop of Matagalpa since his denunciation of the closure by the authorities of five Catholic radio stations in his diocese. He demanded "respect" for freedom of worship and an end to the "harassment" imposed on the Catholic Church.

The Nicaraguan authorities accuse the prelate of wanting to "organize violent groups" and incite "acts of hatred (...) in order to destabilize the State of Nicaragua".

They have multiplied in recent days the prohibitions and vexations against Catholic priests, according to the Cenidh, for which "the government has hardened the repression against the Church and its priests even in the most remote corners of Nicaragua".

The diocese of Siuna announced Sunday evening in a press release the arrest of one of its priests. The prosecution requested that he be remanded in custody for 90 days.

In July, the nuns of the Congregation of the Missionaries of Charity, founded by Mother Teresa, had to leave Nicaragua, expelled as "delinquents", was indignant the Cenidh.

Relations between the Catholic Church and Mr. Ortega's government have been strained since 2018 when protesters demanding the resignation of the Nicaraguan president took refuge in churches.

President Ortega accuses the Catholic clergy of complicity in the coup attempt hatched by Washington. The crisis even led to the expulsion in March of the Apostolic Nuncio, Bishop Waldemar Sommertag.

By attacking the Catholic Church, after having silenced all his opponents, Daniel Ortega, re-elected in 2021 for a fourth consecutive term in a ballot from which all his potential opponents of weight were absent, arrested or forced to exile, continues his quest for absolute power in Nicaragua.