Convoys of agricultural machinery converged on Wellington, Auckland, Christchurch and several other towns in the archipelago, with participants calling on the centre-left government to drop plans to tax 'farts and burps' emitted by animals breeding. 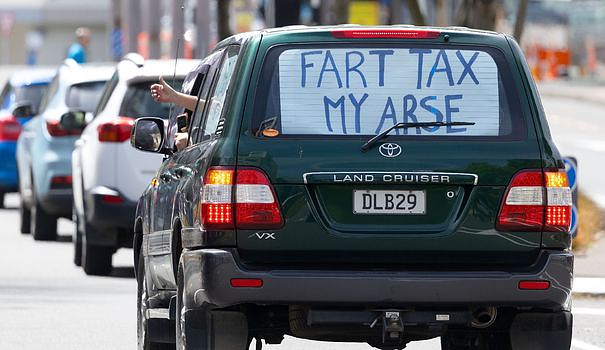 Convoys of agricultural machinery converged on Wellington, Auckland, Christchurch and several other towns in the archipelago, with participants calling on the centre-left government to drop plans to tax 'farts and burps' emitted by animals breeding.

Last week, Prime Minister Jacinda Ardern revealed a plan to introduce such a tax, which would be a world first.

Gases such as methane, naturally emitted in the form of farts and burps by New Zealand's 6.2 million cows and 26 million sheep, as well as the nitrous oxide contained in the urine of cattle, are among the country's biggest environmental problems.

Methane is less abundant and does not stay in the atmosphere as long as carbon dioxide, but it is a much more powerful contributor to global warming.

This chemical compound is responsible for around 30% of global warming since the Industrial Revolution, scientists estimate, although it only accounts for a fraction of the composition of the greenhouse gas.

This tax is necessary to slow climate change, Ms Adern argued. It could even benefit farmers, who will be able to sell meat that is more expensive because it respects the climate.

But "we are not going to accept it", are indignant the farmers. Thousands of agricultural workers joined Thursday's protest to decry the bill.

"The government's ideological commitment to punitive and counterproductive taxes on emissions (from) agricultural production threatens the existence of rural communities," said Bryan McKenzie of Groundswell NZ, the organization behind of this demonstration.

Environmentalists say New Zealand farmers are caught in the crossfire.

"The rural and agricultural sector of this country has been hit hard by floods, intense severe storms and droughts this year alone," said Emily Bailey of the organization Climate Justice Taranaki.

"The situation is only getting worse. Farmers can either adapt and quickly reduce their emissions or suffer more, like everyone else," she lamented.