New violence in Ecuador, subject to the state of emergency 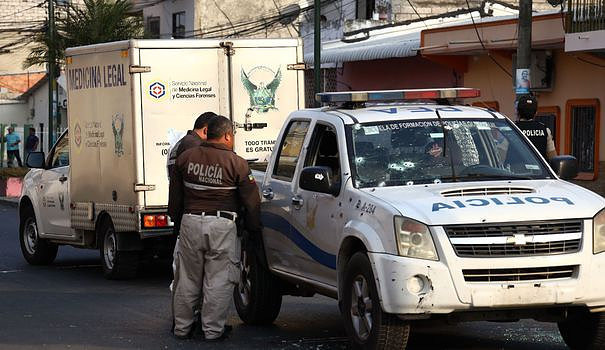 These deaths are in addition to those of six people, including five police officers, killed since Tuesday in a series of attacks with explosives and firearms against police stations, gas stations and a hospital in Guayaquil. , a large port with 2.8 million inhabitants.

According to the authorities, the violence was triggered by the transfer to other establishments of 1,000 detainees from the prison of Guayas 1, controlled by gangs of drug traffickers.

They also affected other prisons in the country, notably in the coastal town of Esmeraldas, near the border with Colombia, where eight guards were briefly taken hostage on Tuesday.

President Guillermo Lasso has declared a state of emergency in the provinces of Guayas and Esmeraldas and a curfew from 9 p.m. (0200 GMT). The measure will remain in effect until December 16.

"These acts of sabotage and terrorism are a declaration of open war against the rule of law, the government and against all of you, the citizens", affirmed the Head of State.

Activity was minimal Wednesday in the streets of Guayaquil where passers-by hurried on, looking frightened, while police and soldiers patrolled in small groups.

Security forces announced that they had made 36 arrests on Wednesday, and seized around 20 firearms, ammunition and explosives.

More than 1,200 homicides have been recorded in the city since the start of the year, 60% more than for the same period of 2021, according to official figures.

"I see police cars at night but I'm hiding. I'm afraid of a shooting right there because they (the police) are looking for them," Andrea Aguilar, a 38-year-old saleswoman, told AFP. .

She said she avoided passing near the La Alborada sector police station, where one of the car bombs exploded on Tuesday. "It's terrible," she lamented.

"The country witnesses with dismay the actions of the drug trafficking mafias who, in association with contract killers and common criminals, are trying to intimidate Ecuadorians," Defense Minister Luis Lara said on Wednesday.

Drug traffickers, some of whom are linked to Mexican cartels, are waging war on the streets and in prisons across the country, where massacres have claimed nearly 400 lives since February 2021.

Located between Colombia and Peru, the world's largest producers of cocaine, Ecuador has gone from being a drug transit country to that of a major distribution center to Europe and the United States.

In 2021, authorities seized a record 210 tons of drugs, mostly cocaine. Since the beginning of the year, seizures have totaled 160 tons.

"Ecuador is a dollarized country with a corrupt and permeable judicial system. It is the ideal place for criminal activities," human rights lawyer Xavier Flores told AFP.

For the former head of military intelligence, Mario Pazmiño, there is "a criminal governance in the country, in which organized crime has begun to drive the state out of certain territories".

"There will be a metastasis of violence at the national level, starting with the main cities where these organizations already control certain enclaves, and spreading to other cities that are not yet contaminated," he said. he predicts with AFP.