The country's authorities are facing the most widespread protest movement since the pro-democracy mobilizations in Tiananmen Square in 1989, which were bloodily repressed. 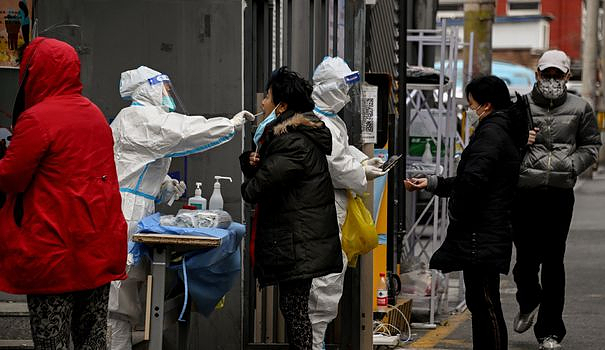 The country's authorities are facing the most widespread protest movement since the pro-democracy mobilizations in Tiananmen Square in 1989, which were bloodily repressed.

In this context, Charles Michel, President of the European Council - the institution representing the Member States of the European Union - is expected in Beijing on Wednesday where he will meet President Xi Jinping, Prime Minister Li Keqiang and the Chairman of the Standing Committee of the National People's Congress (NPC), Wu Bangguo.

The protest comes after nearly three years of harsh health restrictions against Covid and against a backdrop of public frustration with the Chinese political system, a month after Xi Jinping was reappointed for an unprecedented third term as head of the country. .

In Beijing, Shanghai, but also Wuhan, Guangzhou and other cities across the country, protests erupted over the weekend, catching China's powerful security system off guard, which has since tightened the screws to prevent any new gatherings.

However, new clashes erupted overnight from Tuesday to Wednesday between demonstrators and police in Canton (South), according to witnesses and videos published on social networks and verified by AFP.

Footage shows police dressed in white full bodysuits and equipped with transparent riot shields, marching in serried ranks down a street in Haizhu district, as glass objects are thrown around them.

On the videos, geolocated by AFP, cries are heard while orange and blue barricades are knocked down on the ground.

People are also seen throwing objects at the police then, on another extract, a dozen individuals, their hands tied, seem to be arrested by the police.

A Guangzhou resident, who only gave his last name - Chen - told AFP that he saw around 100 police officers converge on the village of Houjiao, which is part of the Haizhu district, and stop at the minus three men Tuesday night.

Haizhu district in Guangzhou, where more than 1.8 million people live, is the epicenter of a new outbreak of Covid-19 cases and has been in confinement since the end of October.

The trigger for these mobilizations across the country was the fire in an apartment building in Urumqi, capital of the Xinjiang region (Northwest), which killed 10 people.

Internet users have accused the health restrictions in force in the city of having prevented the rapid arrival of help, an argument swept away by the authorities.

But the protests quickly took a political turn, with some demanding Xi Jinping's departure.

A heavy police presence in Beijing and Shanghai discouraged any protest attempts in those two cities.

But other gatherings were able to take place on Monday and Tuesday.

At Hong Kong's oldest university, more than a dozen people led the crowd in chanting slogans like "give me freedom, or give me death".

"We are not foreign forces, we are Chinese citizens. China should allow different voices," one protester said.

In Hangzhou, 170 kilometers southwest of Shanghai, small demonstrations broke out on Monday evening, despite the police force.

Authorities' tight control over information and health restrictions on travel within China make it difficult to assess the total number of protesters across the country.

But such a widespread uprising is extremely rare in China, given the crackdown on any form of opposition to the government.

If Beijing is maintaining its strict policy towards Covid for the moment, some gestures of relaxation have appeared in recent days, while the authorities have promised to accelerate the vaccination of the elderly.

The insufficient rate of vaccination in China, particularly among the elderly, is one of the arguments put forward by the government to defend its measures.

Addressing this could offer China a way out of "zero Covid".