The Haut-Savoyarde took advantage of a mechanical incident of "PFP", alone in the lead in the mud of the Olympiapark after a third of the race, to fly away to victory. 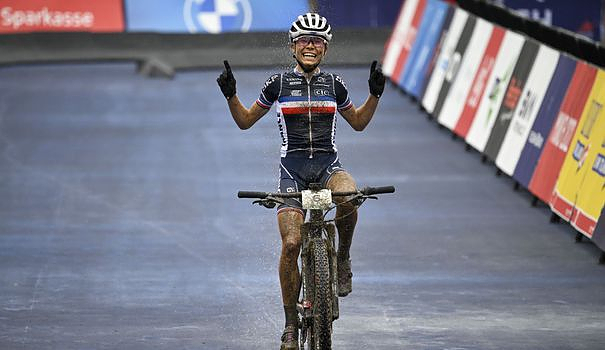 The Haut-Savoyarde took advantage of a mechanical incident of "PFP", alone in the lead in the mud of the Olympiapark after a third of the race, to fly away to victory. The Dutch vice-world champion Anne Terpstra completes the podium, more than two minutes behind the second of the two French women, ultra-dominant a week before their World Championships at home in Les Gets.

Sixth at the Tokyo Olympics, of which she was one of the favourites, Loana Lecomte had bounced back from Japanese disillusion by signing two World Cup successes this season at Leogang in June then Lenzerheide in July.

This continental title against the three Swiss Olympic medalists (4th, 7th and 9th Saturday) promises for the 2020 world champion hopefuls before her first Worlds in the elite next Sunday where her biggest opponent promises to be Pauline Ferrand-Prévot.

After a transparent season, made "complicated", in his words, by the disappointment of the Games and the cohabitation in the team of his ex-companion Julien Absalon, here is "PFP" back in top form.

Admittedly, the 30-year-old mountain biker did not achieve a hat-trick at the European Championships, of which she was double title holder. But the three-time cross-country mountain bike world champion (2015, 2019 and 2020) seemed the strongest in Bavaria.

After slipping away from Lecomte, Pauline Ferrand-Prévot quickly widened a gap of thirty seconds. Mattress more than wasted in the middle of the third of the circuit's seven laps when she lost more than a minute replacing her muddy chain which had come off.