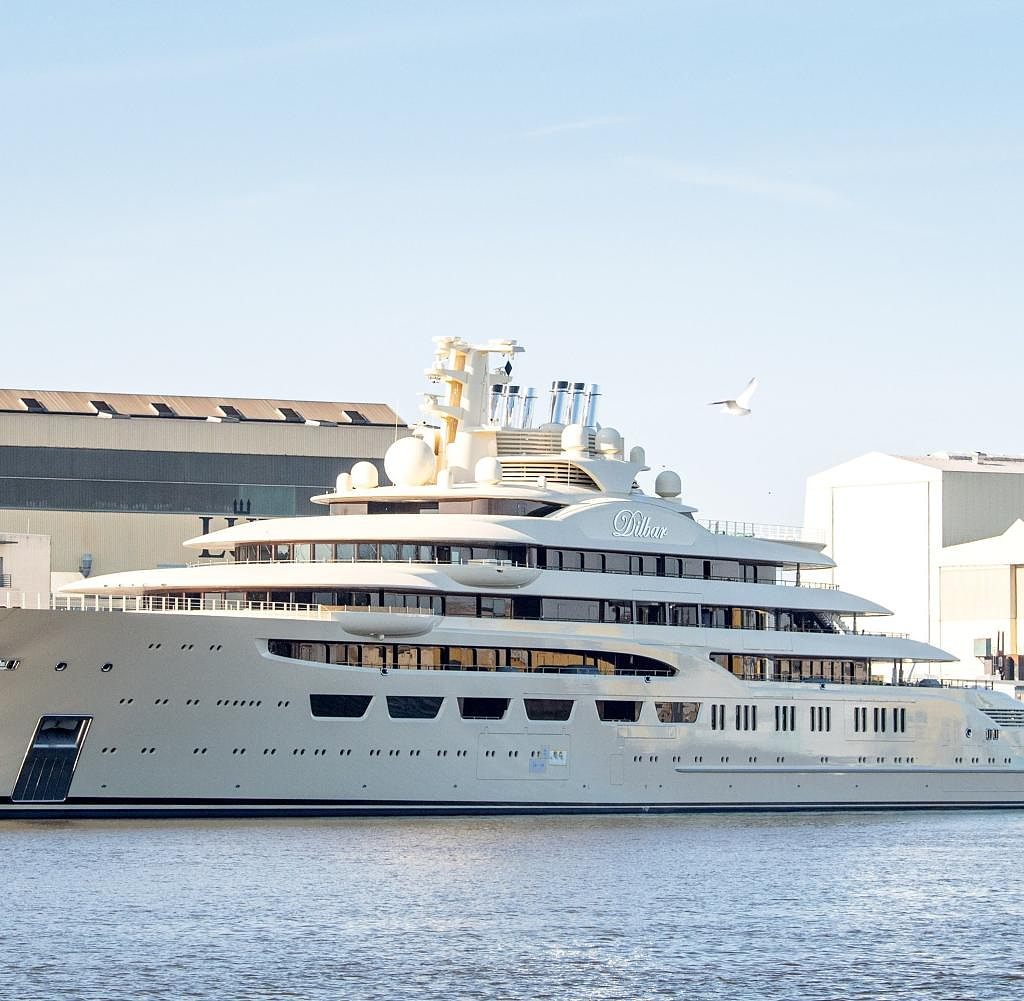 German law enforcement authorities are continuing their investigation into alleged money laundering and tax evasion against Russian oligarch Alisher Usmanov. On Tuesday, the 69-year-old's motor yacht, which is currently in Bremen, was searched. The Frankfurt Public Prosecutor's Office did not mention a name in its statement and only spoke of a "69-year-old entrepreneur from the Russian Federation". But it is the same case in which several villas in the posh holiday resort of Rottach-Egern on Tegernsee in Bavaria were searched last week. They are attributed to Usmanov. He denies the allegations.

More than 60 officials from the Attorney General's Office, the Federal Criminal Police Office and - with administrative assistance - the Federal Navy took a close look at the yacht. The use in Bremen is also based on a request for legal assistance from the US Department of Justice, the Frankfurt authority said.

According to the authorities, the 156-meter-long yacht "Dilbar" belongs to Usmanov's sister and is also subject to sanctions against Russian oligarchs in the wake of the Ukraine war. According to media reports, it is worth more than half a billion euros. For a long time she was in the port of Hamburg, in the dock of the Blohm Voss shipping company. But last week she was towed to Bremen because the shipping company needed space.

The authorities accuse Usmanow of having shifted amounts in the tens of millions to tax havens via a company network. There is a suspicion that the money came from crimes, especially from tax evasion offenses, according to the statement by the Attorney General and the BKA. According to the news magazine "Der Spiegel" it is about 555 million euros. Usmanov made a fortune with a company empire, especially in the metal and steel industry. In 2018 he sold his stake in the English football club Arsenal London for around 600 million euros.

A spokesman for Usmanov rejected the allegations against the oligarch before the raid on the yacht. "These investigations have the character of political persecution," it said in a written statement. "Baseless and slanderous allegations were made" against Usmanov, although he had always paid attention to the integrity and transparency of his assets and to the thoroughness and accuracy of tax payments. The public prosecutor relied on false information and forged documents from opportunists and blackmailers. He never tried to circumvent sanctions.

The statement said that the house on Lake Tegernsee does not belong to him, but to a family trust from which he rented it at market price. Usmanow was never subject to tax in Germany. The valuable Faberge eggs that investigators found in the house are not originals, but souvenirs worth several thousand euros that he bought in Munich for friends and relatives in Uzbekistan.

‹ ›
Keywords:
NewsteamOligarchenUsmanowAlischerGeldwäscheYachtBremenTexttospeechDer SpiegelTegernseeMünchenRussische FöderationBundeskriminalamtAlischer UsmanowKrimiUsbekistan
Your comment has been forwarded to the administrator for approval.×
Warning! Will constitute a criminal offense, illegal, threatening, offensive, insulting and swearing, derogatory, defamatory, vulgar, pornographic, indecent, personality rights, damaging or similar nature in the nature of all kinds of financial content, legal, criminal and administrative responsibility for the content of the sender member / members are belong.
Related News