More money for artists, returns for fans – This is how “fair Spotify” works

You can invest your capital in various ways: in real estate, stocks, art, but also in music. 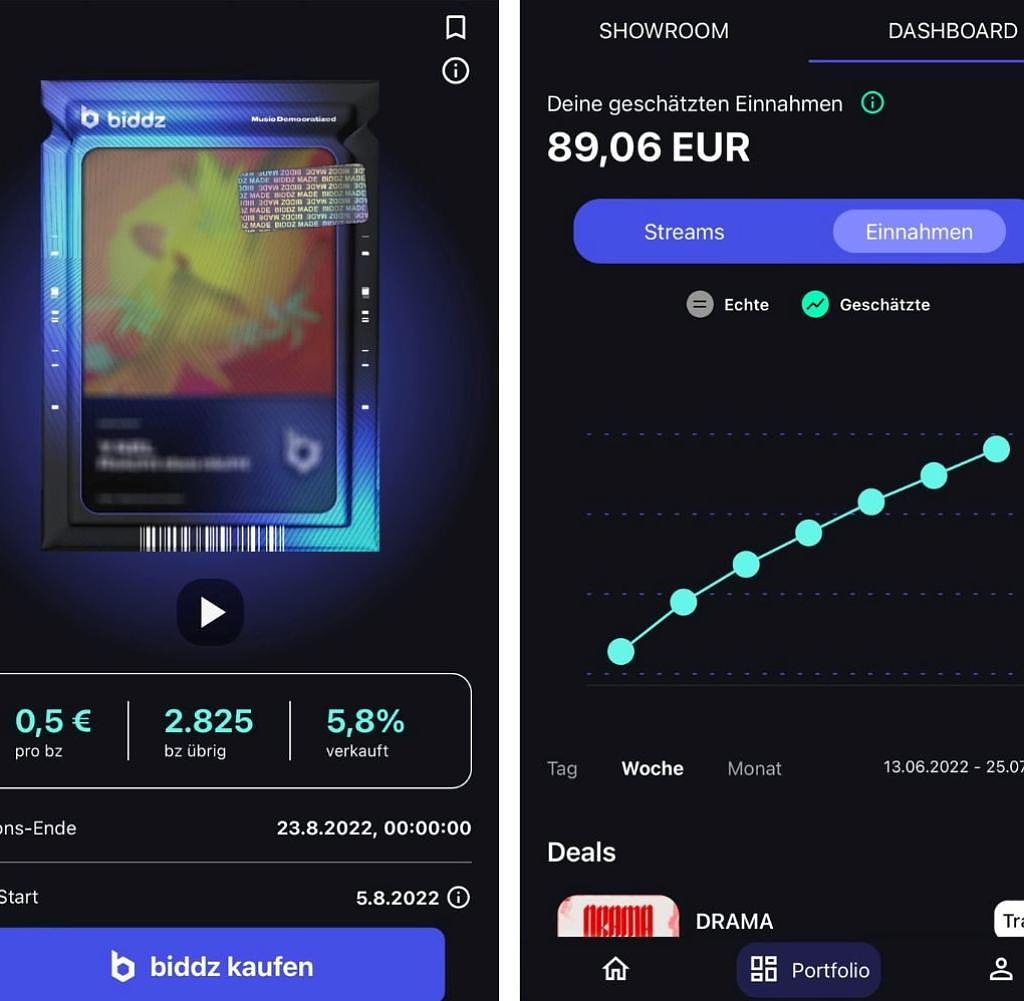 You can invest your capital in various ways: in real estate, stocks, art, but also in music. And digitally. Two former managers of the streaming service Amazon Music founded a start-up at the end of 2021 that supports users with this type of investment. At the same time, their portal Biddz aims to ensure fair remuneration for up-and-coming musicians.

Artists usually earn most of their money from concerts and fan merchandise. Streaming platforms like Spotify or Apple Music generate little money, but they are important. The proceeds there are billed according to market share, which is why large musicians earn a disproportionately large amount of money.

Young bands with little visibility, on the other hand, are fobbed off with a few euros. There is no fixed price, according to media reports in Germany, the current redistribution at Spotify is an average of 0.3 cents per stream. If the musicians are under contract with record labels, they also have to give up a considerable part.

Biddz wants to redesign this distribution. The start-up by Alexander Franck and Michael Höweler sees itself as a "distributor", i.e. a kind of intermediate instance between artist and streaming service. Singers and bands provide shares in songs that are sold on to private individuals via the portal. The former Amazon Music managers take care of the publication on streaming services such as Spotify and also distribute the proceeds.

The founders explain that it is common in the industry for artists to receive an advance. Same with Biddz. In the first step, the composers provide a song snippet, then fans decide if the song could be successful and they want to be part of it.

"We divide each song into 10,000 biddz, i.e. into 10,000 shares," says Höweler. The artists themselves define how many percentages they want to keep, how much a share – a “biddz” – costs and the maximum number of pieces a person can buy.

The minimum price is 50 cents per bidz, which the duo mainly recommends to newcomers. "Here there is a higher risk that the investment will not pay off," says Höweler. Some charge ten euros per share. The rapper Kidnfinity has released a single through Biddz, of which he has sold half of the shares.

He has limited the maximum number per user to 200 bidz, i.e. two percent - so that the owners of the song are spread widely. In the end, the young artist gets an advance payment of 5,000 euros.

The start-up collects the money itself and retains one percent for each advance. Of the income that is ultimately generated via the streaming services, another two percent remain with the tech platform. This amount increases to ten percent once the customer's shares have been amortized. This has only happened once since the start of Biddz at the end of March, says the founding duo.

Young musicians would do the marketing themselves anyway, explain Franck and Höweler. Platforms like Tiktok are an important channel for this. Fans who contributed to songs through Biddz would often help further promote the artists. Because the more often the songs are heard online, the more capital they receive.

The start-up also offers packages: fans pay around ten bidz for a digital greeting from their band or to be added to the list of close Instagram friends.

Every week, the Berlin company brings two to four new artists onto the portal, almost 40 have already signed a contract with Biddz. The advantage over record labels is that the musicians would have to sell fewer shares, says Franck. Especially since the income from the direct sales channel would increase faster anyway.

20,000 users have registered in the past few months. However, only a fraction were given the opportunity to actually participate in a song, says Höweler. Popular campaigns are often sold out after just a few hours.

Biddz can only grow through new customers, and due to the low commissions, sales are still weak at the beginning. "The initially low margin is our acquisition tool, it will stay that way," Höweler defends the decision.

He does not want to say how much the start-up has made so far. Initial financing will bring the Berlin company through for the next few months. The duo does not talk about the sum, but it is a seven-figure fishing round. There was money, for example, from ex-Burda board member Stefan Winners, former McKinsey Germany boss Cornelius Baur and Robert Quandt, co-founder of the influencer cosmetics group Invincible Brands.

‹ ›
Keywords:
GründerszeneStartupsStreamingMusikApps
Your comment has been forwarded to the administrator for approval.×
Warning! Will constitute a criminal offense, illegal, threatening, offensive, insulting and swearing, derogatory, defamatory, vulgar, pornographic, indecent, personality rights, damaging or similar nature in the nature of all kinds of financial content, legal, criminal and administrative responsibility for the content of the sender member / members are belong.
Related News