Moors and Christians both return to the city in big numbers

The Covid-19 pandemic had prevented the towns of Benamaurel and Cullar from celebrating their Moors-Christian festivities for two years. 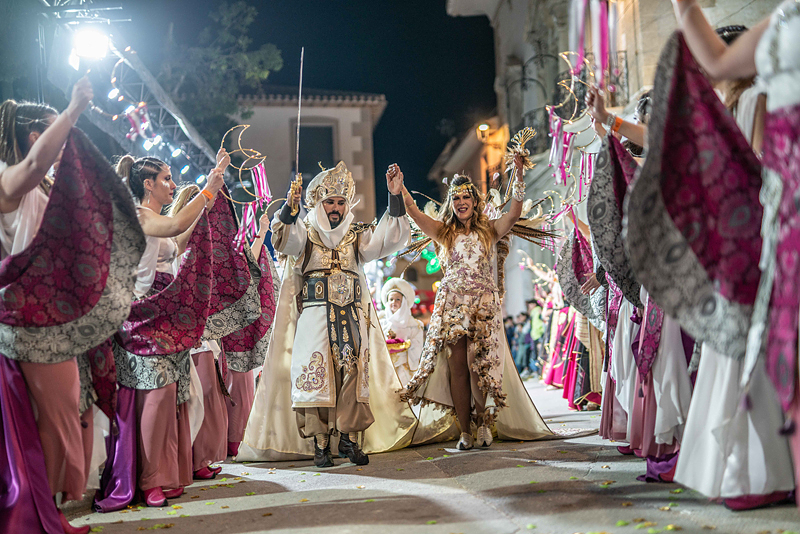 The Covid-19 pandemic had prevented the towns of Benamaurel and Cullar from celebrating their Moors-Christian festivities for two years. Today, however, they will be able to enjoy their wonderful moments. These three Baza towns will be visited by thousands of people. Many will attend the parades, religious acts and pilgrimages, as well as the celebrations, parades, religious acts and pilgrimages. Other visitors visit the area to see some of the most beautiful acts in Granada.

Friday's festivities started in a different manner. In Benamaurel, there was a children’s school parade. The medals were then presented to the new members of the Brotherhood of Our Lady the Virgin of the Head. This was accompanied by the Benzalema Musical Group. The lighting was inaugurated at night with an informal parade. Yesterday, Saturday, Mayor Juan Francisco Torregrosa, the incoming and outgoing Queens cut the inaugural ribbons of the parades. The troupes immediately went to Plaza Mayor to celebrate a floral offer and the coronation the Moorish Queens, Veronica Izquierdo Galera, and Christian Lola Lopez Rodriguez.

Today was Sunday. In the Church of Our Lady of the Annunciation, a solemn Eucharist took place. It was presided over today by the flag-bearers of the Brotherhood and the bearers of badges as well as the Queens of the comparsas. The Rociero Jabaluna Choir was also present. After the mass is over, the Pilgrimage of the Virgen De la Cabeza, accompanied with the Moorish, Christian groups, and the Pakkos, has begun. It will take place from Plaza Mayor to Hermitage, where the "flag" will be played.

Dolores de la Torre Garcia proclamated the festivities in Zujar on Friday. At 12 at night, there was Tamborrada. This was attended by hundreds. Yesterday was Saturday. Mass was celebrated and medals were imposed on the new brothers. The Virgin's image was then taken from the dressing room, and raised again. Residents of Zujar pack the church in great joy, and it is a touching act.

Today is the last Sunday in April. The pilgrimage of the Virgen de la Cabeza, to her hermitage at Cerro Jabalcon, is celebrated. Zujar and other people are also present. Many of these pilgrims come to fulfill a promise.

After they had returned, the first parade of Moors, Christians, from the "Erilla Empedra", to the Plaza Mayor, will take place. This will see the first part "Los Papeles", a sacramental ritual with many centuries of antiquity that will remain unchanged. The parades and masses will continue until Tuesday, when Zujar's festivities end.

Cullar's Moors and Christians traditions date back to 17th century. They reached their present day after consuming various stages and moments, and were always marked by Virgen de La Cabeza celebrations. These lived stages show that the tradition was preserved until the Civil War, when it was lost. It was only in 1982 that it was reestablished, though it was significantly modified to accommodate the Spanish Levant's festive events. Friday night saw the coronation ceremony of Moorish and Christian King was held with great solemnity. Christofer Salvador Vinas, Carmen Rodriguez Bautista, and Raul Cano Galera (Christian) are the Moorish Kings 2022.

This Sunday, at 12:01 pm, the solemn act is of celebrating the Eucharist. The mass and floral offering are currently part of one the most beautiful religious acts in Cullarense. After the Mass, thousands gather on the Plaza to enjoy the brotherhood meal around the Moorish Rice and the crumbs in a Christian booth.

At 6:00 p.m., the Virgen de la Cabeza returns in procession, this one in the hands the Moors. The entourage continues through the streets until it reaches Church's atrium. Once there, the second part of its roles is performed.

Today, after two days of rain, the parades of Cullar and Benamaurel, and Zujar, will shine brightly because the weather has improved and it is sunny and clear.

‹ ›
Keywords:
MorosCristianosVuelvenGrande
Your comment has been forwarded to the administrator for approval.×
Warning! Will constitute a criminal offense, illegal, threatening, offensive, insulting and swearing, derogatory, defamatory, vulgar, pornographic, indecent, personality rights, damaging or similar nature in the nature of all kinds of financial content, legal, criminal and administrative responsibility for the content of the sender member / members are belong.
Related News