With twenty kilos of luggage each in the saddlebags, a Blues jersey flocked with two stars, blue-white-red flags, a helmet and cans, Mehdi Balamissa and Gabriel Martin, 26, launched their improbable journey on Saturday, from the Stade de France in Saint-Denis. 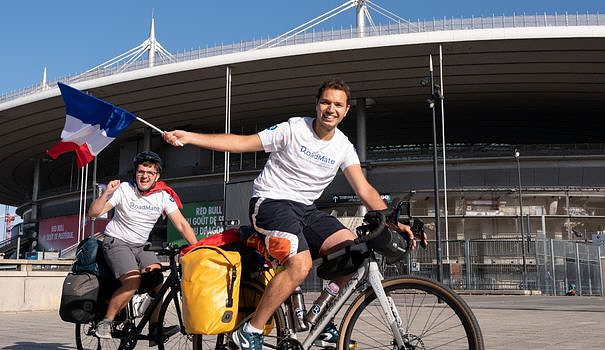 With twenty kilos of luggage each in the saddlebags, a Blues jersey flocked with two stars, blue-white-red flags, a helmet and cans, Mehdi Balamissa and Gabriel Martin, 26, launched their improbable journey on Saturday, from the Stade de France in Saint-Denis.

"Come on Blues! We're going to Qatar!!", they exclaimed enthusiastically as they got on their bikes to set off on the forecourt of the enclosure.

The program ? Reaching Istanbul in a month, before crossing Turkey from west to east, Iran from north to south, boarding a ferry for the United Arab Emirates, until arriving, mid-November, in Doha , a few days before France-Australia, the first match of the Blues in Qatar on November 22.

"The idea came to us last year," Mehdi Balamissa told AFP. “We followed the Blues in the League of Nations in Italy by bike, and we thought it would be great to see things bigger. Since I am self-employed, Gabriel is intermittent, we were able to free up three or four months to make this crazy idea a reality," he says.

The two friends, members of the club of supporters of the Blues and accustomed in recent years to the matches of the world champions outside, are supported by the French Football Federation (FFF) in their adventure and intend to open a kitty for the benefit of an association that promotes solidarity travel. They will share their journey on an Instagram account (@mondialavelo).

"There is a lot of excitement and also a good dose of the unexpected. We know that there are bound to be problems, but that's what will make things magnificent in the end", explains Mehdi, aware that long desert days await them in the Middle East, among other places.

The two supporters also intend to promote a more sustainable alternative to this type of travel, without however hiding their faces on the scope of their message, in the context of a decried World Cup in terms of carbon footprint.

“We know very well that to carry this speech to the maximum, it would be necessary not to go to Qatar. But more than the destination, it is the trip itself which is the most important. in value, assures Mehdi. We simply want to show that we don't have to be cycling champions to experience the adventure differently."