Mondial-2022: before Qatar, the puzzle of an atypical preparation

While the globalist teams have started their final international window this week before the big planetary meeting, the atypical and ultra-tight schedule of the pre-World Cup, disputed for the first time in the middle of a sports year in Europe and not abroad. 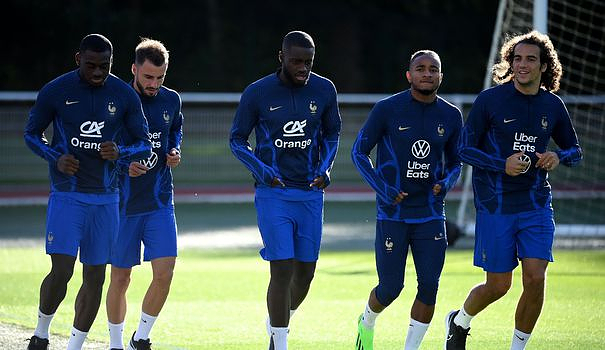 While the globalist teams have started their final international window this week before the big planetary meeting, the atypical and ultra-tight schedule of the pre-World Cup, disputed for the first time in the middle of a sports year in Europe and not abroad. off-season, will leave no margin to the 32 national selections.

Between the last weekend devoted to the club championships, November 12 and 13, and the Qatar-Ecuador opener on Sunday November 20, the players will have only one week of development, compared to three weeks in one month before each major competition. A major unknown.

"The coaches will have to put up with things and pray", sums up for AFP Nicolas Dyon, physical trainer who worked for several L1 clubs including Nice, Rennes and Saint-Etienne, who believes that the physical form of the players will be in the hands of each club. "It's very problematic in terms of physiology and performance. It's tossing a coin."

The coaches try to put things into perspective by arguing that most of them are in the same boat, such as Didier Deschamps, boss of the France team: "The fact of not having the possibility of having a match before the competition, it's unfortunate but it will be the case for almost everyone," he noted last week.

"It's the same for everyone, so it's fair," said Spain coach Luis Enrique.

If reigning world champion France, which starts on November 22 against Australia, does not intend to play a friendly match, it is not the choice of Germany, which will enter the competition on November 23: it plans a mini-preparatory camp in Oman from November 14 to 18, with a friendly against the Omanis on November 16.

Lionel Messi's Argentina are counting on a last informal run-in against the United Arab Emirates on November 16, while Cristiano Ronaldo's Portugal are expected to face Nigeria on November 17.

“The preparation for the World Cup is totally different from previous editions. We have less time,” summarized Oliver Bierhoff, manager of the German selection.

- "Small teams can take advantage of it" -

Other selections, such as Qatar, have obtained that their internationals be released by their upstream clubs to prepare for the duration, which promises great physical disparities from one selection to another.

"My opinion is that we will see big surprises at the World Cup. Teams that we do not expect will be in good shape", analyzes Nicolas Dyon, former physical trainer for the Qatari selection in the early 2000s. "We are going to a country with a lot of uncertainty in terms of humidity (...) How will the players adapt? It's the small teams that can take advantage of it."

Tite, Brazil coach, notes that he will be forced to select only players in great shape, whatever their status, and Deschamps does not say anything else when he warns that the star midfielder Paul Pogba, convalescing, will not come only if he is fully "fit".

"Our first match is only ten days after the arrival of the players for the rally. So either you are in good shape or you are not on the list," Tite told the Bandeirantes television channel.

Only positive point: with a World Cup in the middle of the sports year in Europe, the fatigue of the end of the season will not weigh on the legs.

"The advantage of this World Cup is that the players will be less tired, physically and mentally," summarized Cléber Xavier, assistant to the Brazilian coach, on the Globo Esporte site.

"We cannot say that they are at 60 matches," confirms Nicolas Dyon, with a caveat: "The condition is that the players have done a great pre-season preparation."