Mojacar's new bus station is up for tender

The Ministry of Development, Infrastructure and Territory Planning is inviting tenders for the Mojacar public transport interchange. 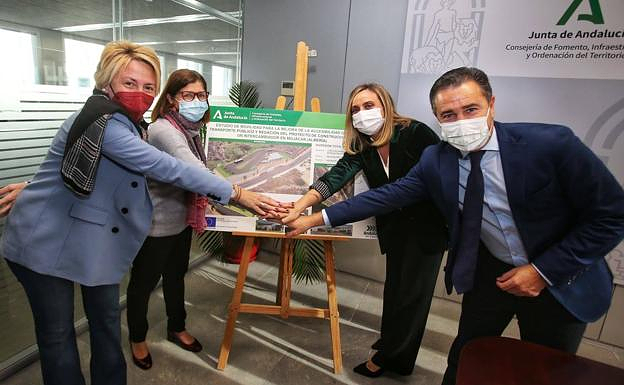 The Ministry of Development, Infrastructure and Territory Planning is inviting tenders for the Mojacar public transport interchange. Eloisa Cabrera (territorial delegate) stated that the tender amount is 650,000 Euros and that it will include the construction of a bus stop in a municipality with a quadruple population in the summer months because of its touristic nature.

The Mojacar City Council and the Ministry of Public Works signed the December 9 agreement. "We take another step with the tender process so that before year's end, this town has the necessary infrastructure to support its development," said the delegate.

Cabrera stated that the new infrastructure would allow for the delivery of public transport services in an appropriate manner. It will also guarantee the safety of passengers during boarding and disembarking of buses. These facilities can stop up to four buses.

Marifran Carazo stated that the agreement "marks the starting point for construction of a bus stop that covers with guarantees both the demand of the residents as well as the many tourists who visit Mojacar every year". According to the counselor, this action will be financed by Feder funds and will require an investment of 686.300 euros for the project, technical documents, and the works.

Mojacar has nearly 7,000 residents and a population of 40,000 in summer. Due to the tourism nature of the area, more than 40 bus expeditions stop at the Almeria municipality. Despite the high number of passengers, there is no centralized public transport system. There are many points where intercity buses stop throughout the municipality. La Fuente is the main bus and it is located at Avenida de Andalucia near Camino Huertas de las Parras.

Following an agreement between the Consistory and the Development Delegation in Almeria, the General Directorate of Mobility of the Junta will locate the new bus interchange on a 5,607 meter municipally-owned plot on Avenida De Andalucia, AL-6111 (which is the road connecting the historic centre of the municipality to its coastal development). It also has a strong connection to the Mojacar variant, and provides a direct exit from the Autovia del Mediterraneo. On June 24, the Mojacar City Council approved the action plan on this land that is currently in disuse.

This infrastructure will enable the provision of public transport services in an appropriate manner. It will ensure safety for the population getting on and off buses, as well as protecting them from adverse weather conditions. These facilities can stop up to four buses at once. It will also have a waiting area and adjacent services. There will also be a taxi rank for the surrounding areas and another one for urban buses. This will ensure user accessibility and encourage intermodality.

Both parties agree to the construction of this new interchange as part of their collaboration agreement. The Ministry of Development, Infrastructure and Territory Planning will bear the costs of the work and will also be responsible for the technical project's design, bidding and execution. The Mojacar City Council will, for its part, agree to the subjective demanial modification for the transfer ownership of the plot to the Junta de Andalucia in order for the construction and operation of the transport interchange. It will also provide water, electricity and access services.

The Ministry of Development, Infrastructure and Territory Planning launched this project as part of a strategy to promote public transport by building interchanges. Five new bus stations will be built in Andalusia, El Puerto de Santa Maria (Cadiz), Huescar(Granada), Almonte/Huelva), Beas de Segura/Jaen), and Lebrija (Seville) with a budget totaling 2.6 million euros. These works will only be completed after the transfer of the land to the municipalities is complete.

‹ ›
Keywords:
FomentoLicitaNuevaEstacionAutobusesMojacar
Your comment has been forwarded to the administrator for approval.×
Warning! Will constitute a criminal offense, illegal, threatening, offensive, insulting and swearing, derogatory, defamatory, vulgar, pornographic, indecent, personality rights, damaging or similar nature in the nature of all kinds of financial content, legal, criminal and administrative responsibility for the content of the sender member / members are belong.
Related News