Mogadishu: panic and horror in search of victims of the double car bombing

Nearly 300 people were also injured in this attack, claimed by jihadist Shebab militants, the deadliest in five years, and Somali President Hassan Sheikh Mohamud estimated that the toll should further increase over the hours. 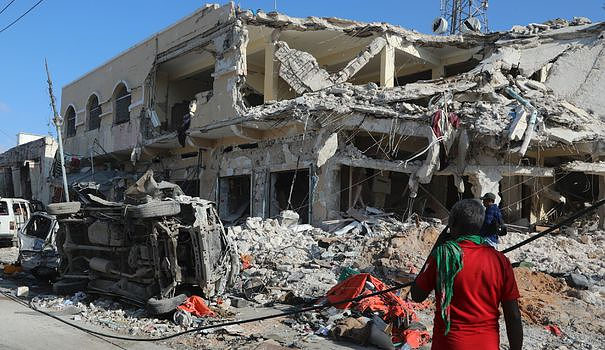 Nearly 300 people were also injured in this attack, claimed by jihadist Shebab militants, the deadliest in five years, and Somali President Hassan Sheikh Mohamud estimated that the toll should further increase over the hours.

Abdiasis Abdi, a 22-year-old student, spent hours overnight from Saturday to Sunday looking for his sister who lived in Zobe, a neighborhood full of various businesses.

"We found him this morning, thanks to some recognizable clothes," sobbed the young man, explaining that the rest of his body was unrecognizable. "I've never seen anything so horrible," he breathes.

The attack, carried out by two car bombs which exploded a few minutes apart, also overwhelmed hospitals and clinics in this country with a health system ravaged by decades of conflict.

In search of his sister-in-law, Mohamed Ganey describes corridors crowded with victims left almost without care. His joy at having found her was short-lived: "She died of her injuries a few minutes later".

“Everyone is in shock. The only question we ask ourselves is why kill so many innocent people?” he adds.

Police officer Adan Mohamed struggles to control his emotions. He was one of the first to arrive on the scene, after the explosion of the second vehicle bomb.

"I couldn't sleep all night, because of the horror of the scene," he told AFP, remembering the baby he discovered with his colleagues next to his mother. dead.

"I cried and cried nonstop after seeing his face covered in his mother's blood. He couldn't even cry he was so shocked. He just stood there, blinking, staring.

Police spokesman Sadik Dudishe stressed that many victims were women and children, particularly present on this Saturday afternoon in this very popular district.

The attack took place at the very crossroads which had already been hit by the most serious attack ever committed in Somalia: 512 people were killed on October 14, 2017 by the explosion of a truck full of explosives.

Witnesses said the road was full of rows of tuk-tuks and other vehicles when the first explosion took place.

"Rescuers, security forces and people looking for their relatives immediately rushed to the scene and the second explosion sounded," said Sumayo Ali, who survived the attack.

Shop owner Mohamed Jama, who was with four other men when he heard a loud explosion, said he had crawled over broken glass to get to safety.

Outside the store, "there were dead bodies and injured people everywhere, some injured people were screaming, that's what I remember now," he told AFP from his hospital bed.

On Sunday morning, the area around the intersection was calm and a handful of security guards patrolled the road as rescue workers tried to clear the rubble and extract more bodies.

The neighboring buildings suffered heavy damage, their windows were smashed and walls collapsed.

For Hussein Jeeri, who lost a friend at the same crossroads five years ago, tragedy struck again when his sister was injured on Saturday. Walking "in the streets of Mogadishu is like walking on sharp swords, we all dread being killed or injured one day".