Miura, the first Spanish space rocket that can be reusable 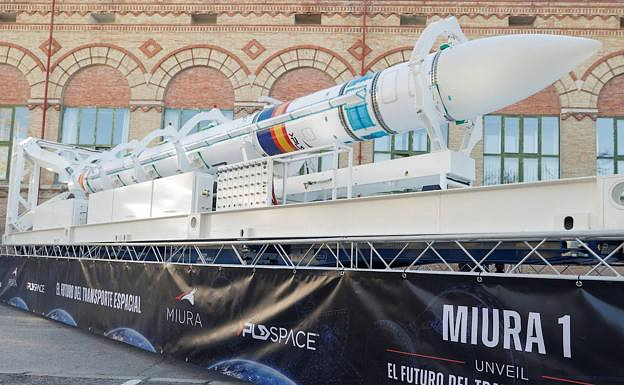 Spanish firm PLD Space presented Friday the Miura 1 suborbital launch rocket. It will be launched into space in 2022's last quarter to make it the first European reusable propellant.

Although the launcher was presented in Madrid fully assembled, it has yet to pass the system qualification phase and the combined test. This will take place in the next months. The launcher will then be moved to the El Arenosillo Experimentation Center, Huelva facilities that INTA (National Institute of Aerospace Technology), has agreed to. This is the Ministry of Defense's polygon, which borders the Coto de Donana National Park. It is where the Armed Forces test the launching of missiles. This is why it is an exclusion zone that airlines must avoid during days of tactical maneuvers.

The Miura 1 rocket, which is 12.5 meters tall, can lift payloads up to 100 kilos or 150 km high. It takes twelve minutes to fly, during which three minutes of microgravity is achieved for experiments. The launcher is returned to the sea with a parachute, which it then safely recovers with its payload. The directors of the company also point out Mirua 1 as a technological demonstration for the company's objective to launch a larger orbital rocket, Miura 5 in 2024. This will allow Spain to join the few countries that have the capability of successfully sending small satellites into space.

The company, which is based in Elche, Alicante, has technical facilities in Teruel and Huelva. It was founded in 2011 and has raised more than 36 millions to promote its "new space" project. Jesus Verdu, co-founder of the company and director of business development, presented the case for investment and development in the space sector. He stated that 'We all consume the industry with GPS, Formula 1 races and investment in stock markets, telecommunications, and telecommunications. It is the engine that drives everything and keeps it growing. The next Internet will be Space.

‹ ›
Keywords:
MiuraPrimerCoheteEspacialEspanolReutilizable
Your comment has been forwarded to the administrator for approval.×
Warning! Will constitute a criminal offense, illegal, threatening, offensive, insulting and swearing, derogatory, defamatory, vulgar, pornographic, indecent, personality rights, damaging or similar nature in the nature of all kinds of financial content, legal, criminal and administrative responsibility for the content of the sender member / members are belong.
Related News