After the recent crisis between France and Italy around the reception of 234 migrants rescued by the humanitarian ship Ocean Viking, the European Union is bringing together European Ministers of the Interior. 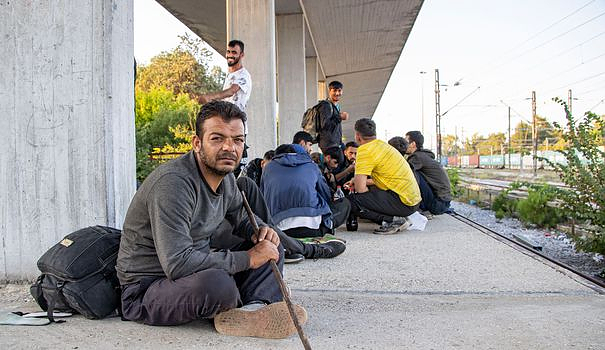 After the recent crisis between France and Italy around the reception of 234 migrants rescued by the humanitarian ship Ocean Viking, the European Union is bringing together European Ministers of the Interior. The meeting, which will take place today in the afternoon, was convened at the request of Paris.

The boat finally landed in France on November 11 on an "exceptional basis" after the far-right Italian government of Giorgia Meloni refused to welcome it. These tensions have revived the very sensitive debate on solidarity between EU countries on migration, while a reform, presented two years ago by the European Commission, is stalling.

In response to the attitude deemed "unacceptable" by Rome, the French Minister of the Interior Gérald Darmanin announced to suspend the planned reception in France of 3,500 asylum seekers in Italy. A reaction denounced as "unjustified" by Giorgia Meloni, who recalled that her country had welcomed nearly 90,000 migrants this year, from the Mediterranean migratory route.

However, if the question of the reception of ships like the Ocean Viking is under the spotlight, the "Balkan route" worries the countries of Central Europe, in particular because of the war in Ukraine. According to the Frontex agency, 130,000 irregular entries have been recorded in the Union since the beginning of the year via the "Balkan route" out of a total of 280,000, an increase of 160% compared to the year. last, and 77% in total. Unheard of since the 2016 crisis. In October alone, nearly 22,300 crossings were recorded by Frontex on the Balkan route. The Czech Republic, in the rotating presidency of the EU, has notably expressed its concern on the subject.

This route is the source of "more than half of the illegal arrivals of migrants on EU territory", underlined the Czech Minister Vit Rakusan after a meeting Thursday in Prague with his Austrian counterparts, Hungarian and Slovak, on the eve of the meeting in Brussels.

For a year, this road, which goes from Greece to Hungary, via Croatia via North Macedonia or Albania, has again been very popular. Since 2016 and the closure of the borders, the number of crossings had dropped considerably, and had even fallen to less than 6,000 in 2018.

But this year, they have reached an all-time high. However, these borders are closely monitored. In many European countries, controls have been strongly reinforced. Walls and barbed wire have sometimes been installed, such as on the Hungarian border, where Prime Minister Viktor Orban erected a double fence four meters high in 2015. According to many experts, this increase in crossings is explained by the visa policy of Serbia. If Syrians and Afghans are still the most numerous, other nationals go through the "Balkan route" simply because they do not need visas for this country. This is for example the case of Tunisians, Moroccans or even Indians.

The countries of the European Union criticized Serbia in October for serving as a gateway to the EU for Turkish, Indian, Tunisian, Cuban and Burundian migrants, exempted from visas until then to go to Serbia. On Wednesday, in the face of pressure from the EU, Serbian President Aleksandar Vucic announced that his country, a candidate for entry into the EU since 2012, now imposed visas on nationals of Tunisia and Burundi.

"We have taken steps with the aim of harmonizing our visa policy with that of the EU," Vucic said on Wednesday. "We no longer have a visa-free regime with Tunisia (...) and with Burundi". "Soon, two other countries will be subject to this same measure because we will have to have the same visa regime as the EU," he continued, without specifying which countries they were.

Faced with this return of refugees to his border, Viktor Orban recently promised to add a meter to the fence and to recruit 4,000 border guards in a new special police corps. Due to Russian bombardments of Ukraine's energy infrastructure as winter approaches, Ukrainians may swell the ranks of refugees from the Balkan route.