On a daily basis, Hussein Abou Saddam, president of the Egyptian farmers' union, already observes this: "young people from rural areas migrate abroad or to big cities to work in industry, for example", he tells the AFP. 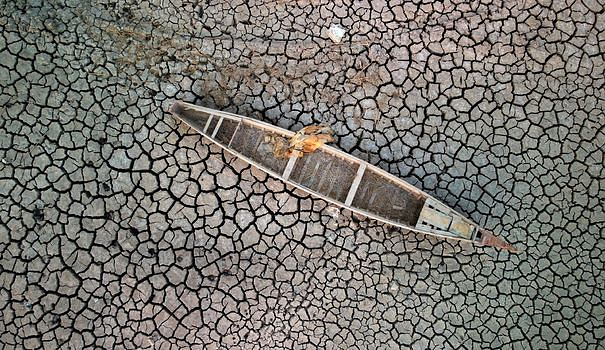 On a daily basis, Hussein Abou Saddam, president of the Egyptian farmers' union, already observes this: "young people from rural areas migrate abroad or to big cities to work in industry, for example", he tells the AFP.

Behind these departures, there are climatic reasons, he says.

If Egypt already suffers from "its overpopulation (104 million inhabitants) and the fact that it is one of the driest countries in the world", the new hazards linked to climate change "such as the appearance of new parasites" have made farming less profitable, he continues.

Already, "90% of the refugees on the planet come from territories extremely vulnerable to climate change", notes the Office of the United Nations High Commissioner for Refugees (HCR).

"If people can no longer feed themselves or work their land, they have few alternatives to displacement," Amy Pope, deputy director of the International Organization for Migration (IOM), told AFP.

In 2021, the increase in natural disasters forced "almost three million people to leave their homes in Africa and the Middle East", recalls Ms Pope. "And we think the situation is only going to get worse."

In Egypt, in 2060, climate change could have taken away half of the agricultural sector, according to climate specialists.

In addition to "the drop in" agricultural production, "there is also the attraction for the city, its way of life and its services", nuance Florian Bonnefoi, researcher attached to the Center for Economic, Legal and Social Studies and Documentation (CEDEJ) in Cairo.

Despite everything, for the World Bank, in 2050, if nothing is done, there will be 216 million climate migrants, families forced to move within their own country, including 19.3 million in the five countries of 'North Africa.

If this area is particularly exposed, it is because its densely populated coasts are among the most threatened by rising waters: 7% of the inhabitants live there less than five meters above sea level, according to the Institute. European Union of the Mediterranean (IEMed).

Naturally, the populations will converge towards the metropolises: Cairo, Algiers, Tunis, Tripoli, the Casablanca-Rabat corridor and Tangier.

But, warns the World Bank, these "hotbeds of climate immigration" are themselves vulnerable to rising waters.

In Alexandria, for example, on the Egyptian coast, two million people, or nearly a third of the inhabitants, will be displaced and 214,000 jobs will disappear if the sea rises by 50 centimeters.

Such groupings "increase the pressure on resources", warns economist Assem Abu Hatab, which "can lead to violent conflicts" in a region where agriculture accounts for 22% of employment.

Already in Sudan, clashes between tribes for access to water and land cause hundreds of deaths each year. In recent days, in Blue Nile State alone, at least 250 people have died in the fighting.

According to Unicef, of the 17 most water-poor countries in the world, eleven are in the Middle East or North Africa.

In Iraq, for example, if nothing is done by 2050, "with an additional degree and 10% less rain, 20% of the fresh water" in the country of 42 million inhabitants risks disappearing, depriving one-third of agricultural land from their irrigation, according to the World Bank.

Jordan, one of the driest countries in the world, had to double its water imports from Israel in 2021 and the Gaza Strip, under Jewish state blockade, suffers from a chronic water shortage. for several years.

In Copenhagen and then in Paris, the international community "undertook to help developing countries cope with the impact of climate change" by supporting "a different agricultural practice and better water management". , recalls Ms. Pope.

At the beginning of September, 24 African countries urged him to respect his commitments as soon as possible.

They will plead their cause again at the COP27 which will open on November 6 in Egypt.

Because it will be necessary, says Ms. Pope, "to find alternative sources of employment and therefore of income" to stem climate migration.