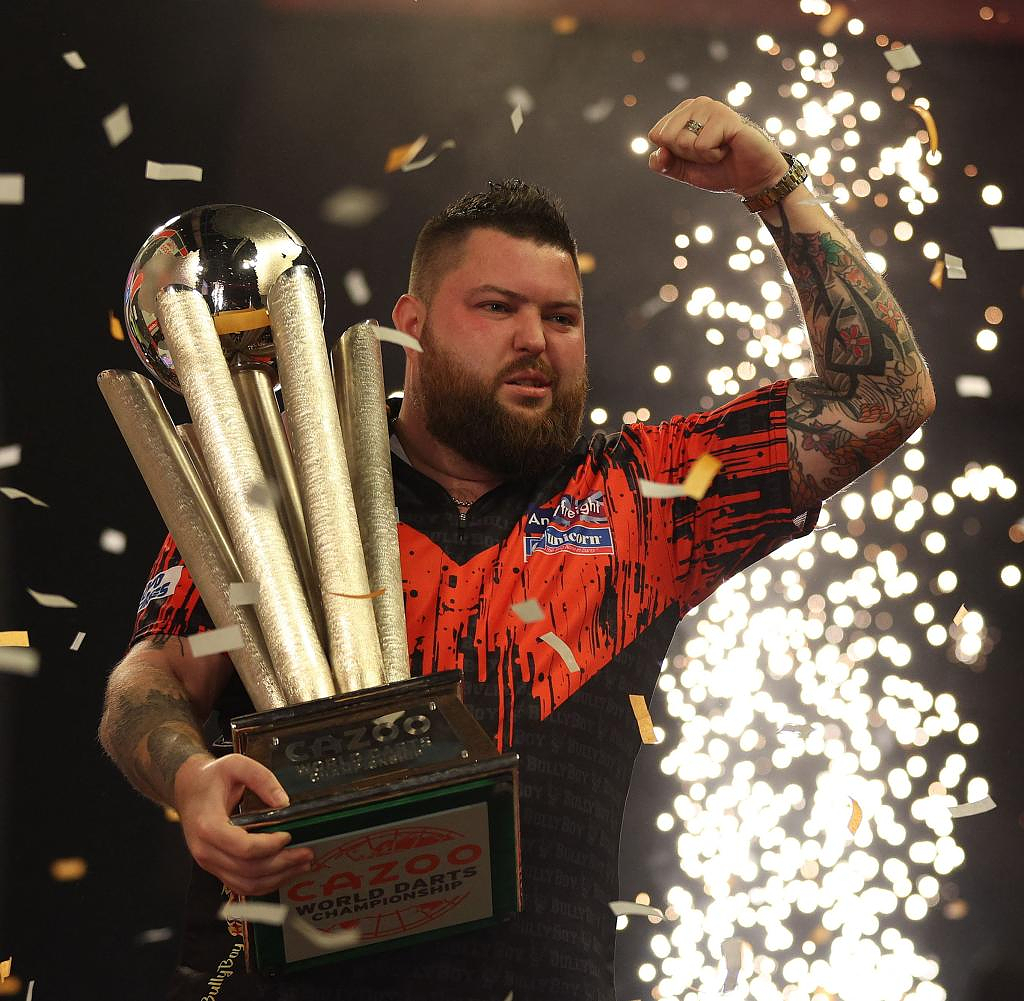 Darts professional Michael Smith has secured the world championship title for the first time. The Englishman, who only won his first major tournament at the Grand Slam of Darts in November after losing nine major finals, prevailed 7-4 against top favorite Michael van Gerwen in a memorable World Cup final and secured the £500,000 prize money . In 2019 he had lost the final 3: 7 against the Dutchman, in the previous year he had lost 5: 7 to Peter Wright there. With his success, the 32-year-old, who ended Gabriel Clemens' sensational run in the semi-finals, also takes over the top of the world rankings for the first time.

“Even Michael Smith will not stop me. Nobody will stop me," the happy winner said to his opponent in the final after beating Dimitri van den Bergh 6-0 in the semifinals: "I feel very good and the fans deserve this final. Michael Smith and I are a good finale for darts I think.” He should be right on at least one of the two prophecies.

The Dutchman took advantage of Smith's throw right at the start and checked 84 points to lead the set 1-0. A start as hoped by some, feared by some, but expected by most. What then happened, however, no one would have thought possible. With the score at 1:1 in the second round, the 3,200 fans at Ally Pally witnessed something new. Although the nine-darter came after Lewis against van Barneveld in 2015 for the second time in a World Cup final - but there had never been one like it.

Van Gerwen was left with 144 points after five triple-20s and one triple-19, Michael Smith after six triple-20s with 141. Both had the opportunity for the perfect game, which fans have been waiting for in vain since the World Cup began on December 15th had waited. MVG then nurtured hope with two more triple-20s and actually threw on the board for a nine-darter. His arrow just missed double 12 but gave his opponent the chance. And Smith checked the classic way: triple-20, triple-19, double-12. The Ally Pally - a madhouse. 17 perfect darts in one leg - a first. And in a World Cup final at that. More is simply not possible.

For the previous number four in the world also the break that he needed to win the set. After winning 14 rounds in a row, his Dutch opponent lost the last round against Dirk van Duijvenbode in the round of 16, again a set. And a little later the second. The best leg in darts history, with which the two superstars raised their point average to 108, left its mark on van Gerwen. Smith used the shock to lead 2-1.

The favorite shook himself briefly after the first deficit in this tournament and came back with a 3:0 and secured the decider of the fifth set in 14 darts to 3:2. Then he took his foot off the gas pedal a little, played only a 93 average in the sixth set and consequently gave it 1:3.

Smith had previously lost 37 of his 50 duels with MVG, but also won three finals, two on the European Tour and one in Madison Square Garden. Now the triumph on the big stage was imminent, especially since Smith caused completely new feelings in his opponent. For the first time at this World Cup, van Gerwen gave up a set to zero. He was now 3:6 behind - and had to go into the decider in the tenth round. Smith, who had shown no emotion throughout the match, was one leg away from victory. But the Dutchman shortened again to 4:6.

Smith now broke down, hardly hit triples and therefore received fewer and fewer opportunities to check out. Did he show nerves? Was the tank suddenly empty just before the finish line? He was nothing to look at, but he was quickly trailing 0:2. After the 1: 2 hope germinated in his family in the audience again. With the 2:2 he had turned the momentum and used the throw in the decider. He started the leg with his 22.180, double eight bringing him bliss ten darts later.

After the World Champion has been determined, the PDC Tour continues with the Q-School. Hundreds of players, including the World Cup participants Fallon Sherrock and Beau Greaves, as well as the German World Cup record holder Max Hopp, will try to secure one of the few tour tickets in Milton Keynes and Kalkar starting next weekend, and ideally at the end of the year to be on the World Cup stage again.