Year after year, fires are becoming more and more devastating. 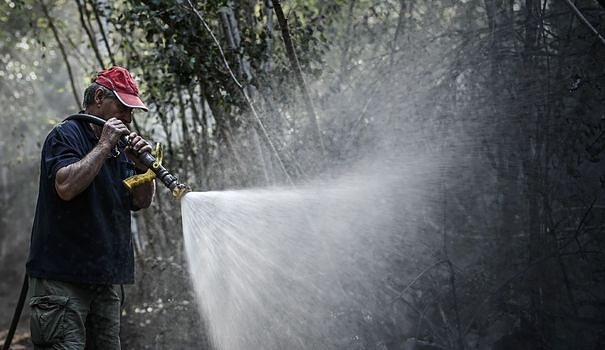 Year after year, fires are becoming more and more devastating. Today, they are burning twice the forest area compared to 2001, i.e. almost 3 million additional hectares - an area equivalent to Belgium -, reveals a study by Global Forest Watch (GFW), the World Resources Institute ( WRI) and the University of Maryland. Global warming, caused by human activity, is "likely a major factor", note the authors, since extreme heat waves that make forests arid are five times more likely today than a century ago and half.

If 70% of the surfaces devoured by the flames in 20 years relate to the boreal forests - which cover Russia, Canada and Alaska -, the rest of the planet is not spared. In Europe alone, the provisional toll amounts to 660,000 hectares burned in 2022, according to data from the European Forest Fire Information System (EFFIS). For its part, France recorded its worst year for 16 years, with 61,000 hectares gone up in smoke, in particular because of the two fires in Gironde. A disaster for biodiversity and human health, warn specialists. And while the short-term effects are beginning to be well documented, the longer-term ones remain poorly understood.

When a forest burns, tons of combustion particles are thrown into the atmosphere. More than 4,000 components have been identified by the researchers, including dioxins, furans and polycyclic aromatic hydrocarbons (PAHs): benzene, styrene, carbon particles, monoxide, methane, mercury, etc. "The ENT sphere - ear, mouth, nose - blocks large particles, but the finer ones can penetrate the lungs, the blood, even the brain", explains Doctor Pierre Souvet, cardiologist and founding president of the Association Santé Environnement. France (ASEF). Based on numerous studies, the specialist explains that in the short term, people directly exposed to fumes may experience signs of nasal, eye and throat irritation, headaches, respiratory discomfort such as wheezing, or even pain associated with deep breathing.

"A study published in 2011 [Short-term spirometric changes in wildland firefighter, Editor's note] shows, for example, that Corsican firefighters who were poorly protected during their interventions experienced significant short-term effects with a loss of their forced vital capacity - the the maximum amount of air you can exhale after taking a deep breath - more than half a litre, explains the specialist.The study also shows that these negative effects persist for up to three months after the fire season. "

Populations living near the fires are also affected. The smoke from the "small fires" - a few thousand hectares - indeed travels over several tens of kilometers. “And major fires, which burn over tens or even hundreds of hectares, give off so much smoke that the plume can rise 10 kilometers or more, cross the tropopause and enter the stratosphere before traveling thousands of miles. kilometers", as was the case in 2019-2020 in Australia or in 2021 in California, recalls Jean-Baptiste Renard, research director at the Laboratory of Physics and Chemistry of the Environment and Space (CNRS), member of the Air santé climat collective and specialist in fine particles.

A study of a few thousand people exposed to a coal mine fire in the town of Morwell in 2014 shows that an increase of 10 micrograms per cubic meter of fine particulate matter (PM2.5) is associated with a 42% increase in the number of ambulance requests for respiratory problems and 7% for other health problems. Results confirmed by another study on the impact of exposure to smoke from Australian fires, which indicates that emergency room visits and hospitalizations, mainly for respiratory problems, increased by 1.4 to 17% depending on the area. affected.

Some rarer studies indicate that exposure to smoke can cause short-term cardiovascular and neurovascular problems. Indeed, fine particles cause inflammation of the blood vessels, which can promote the risk of myocardial infarction (heart attack) and cerebrovascular accidents (CVA). A meta-analysis - a compilation of scientific studies - carried out in 2015 concludes that each time the level of fine particles (PM2.5) increases by 10 micrograms per cubic meter of air, the risk of stroke increases d around 1%, but the scientists point out that these results need to be consolidated.

Unsurprisingly, these various works show that fragile people are most at risk. Children, pregnant women, individuals suffering from chronic respiratory pathologies and smokers must therefore be extra vigilant during major fires. "But this work also considers that other vulnerable populations deserve to be monitored more closely, including those who suffer from other chronic diseases, such as diabetics", specifies Doctor Souvet.

The longer-term effects are less well known. In addition to the study on Corsican firefighters, which suggests that the pulmonary effects may persist in the medium term, two other studies published in 2011 (Jacquin et al and Adetona et al), evoke "moderate alterations" in the medium long term of the function pulmonary after exposure to wood smoke. "We know that the human body takes a few hours to get used to a new situation and that it remains fragile during this time, so we cannot exclude that very strong exposure may produce long-term adverse effects. , believes Jean-Baptiste Renard. Leads are beginning to emerge, but the data is lacking.

Psychological disorders, including stress, are thus little studied. "Stress is not good for cardiovascular diseases and it also increases certain hormones such as catecholamines which are harmful for cancers", underlines Doctor Souvet. Not to mention that the many PAHs released by the fires have a carcinogenic effect. The data remains partial, in particular because of the difficulty of differentiating the effect of PAHs resulting from fires from those resulting from pollution, but suspicion exists. "A study carried out on wood heating in the Athens region shows, for example, that the carcinogenic potential of polycyclic aromatic hydrocarbons generated by heating represents 31% to 43% of the carcinogenic potential of PAHs generated by diesel", indicates- he. The quality of the wood burned also comes into play: burning a wet log releases more PAHs than burning a dry log. This is why the Environment and Energy Management Agency recently changed its recommendations, specifying that it is necessary to dry the firewood between 12 and 18 months. It is advisable, for the same reason, to light a barbecue from above rather than from below, in order to produce better combustion releasing less PAH.

As for the cardiovascular effects, the specialists again regret the lack of studies. “We know that particles from road pollution increase the risk of heart attack and stroke, so we suspect that there is a danger with fires, but this is not well known”, notes Pierre Souvet. Other works are also concerned with the effects on water quality, on the production of mercury and lead by fires or even the effects on pregnancy (low birth weight, premature children), without provide sufficiently solid data. And some work shows that in the event of chronic exposure, fine particles can penetrate to the brain and cause oxidative stress, which can increase the risk of Alzheimer's disease. But no study has been able to quantify this risk during acute exposure to smoke from fires.

According to a major study published in 2007, such exposure causes oxidative stress which can lead to a decrease in immune defences. "This element is to be linked to the loss of biodiversity caused by fires, insists Pierre Souvet. Because a walk in the forest can improve your microbiota - you will have fewer pathogenic bacteria and more non-pathogenic bacteria in your body - this which improves immune defences. And a Finnish study shows that by greening schoolyards, the skin and digestive microbiota of children improves". A meta-analysis published in 2018 and bringing together more than 140 studies further indicates that exposure to green spaces has many health benefits and even decreases, albeit slightly, the risk of all-cause mortality. By reducing the surface area of ​​forests, fires therefore reduce their potential health benefits.

Encouraged by global warming, fires are expected to become more frequent in the future. The need to put in place rigorous intervention plans - with substantial fleets of aircraft -, just like the need to produce in-depth scientific studies, therefore proves to be pressing.