"Membership in my corps is my private matter"

The membership of Secretary of State Otto Carstens (CDU) in striking connections continues to cause criticism in Schleswig-Holstein. 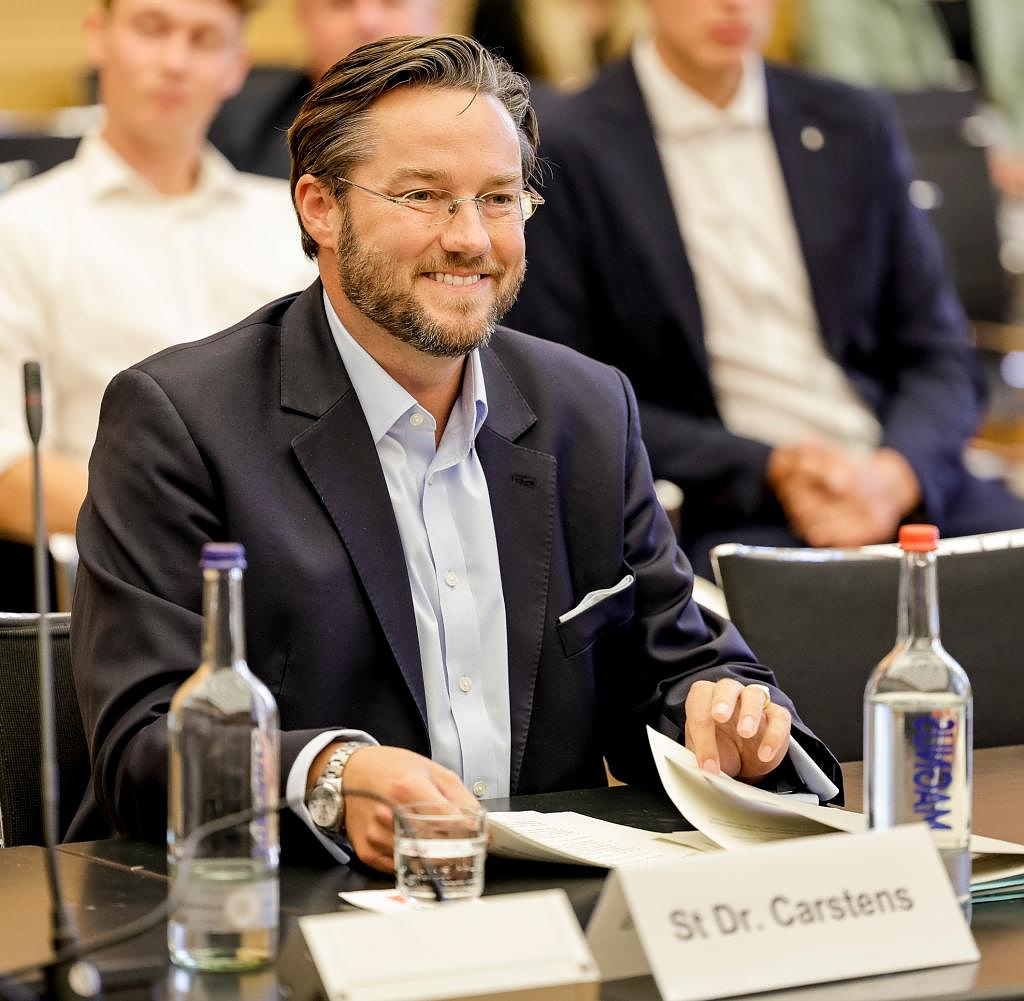 The membership of Secretary of State Otto Carstens (CDU) in striking connections continues to cause criticism in Schleswig-Holstein. "Membership in my corps is - despite a large number of press articles - my private matter," said Carstens on Wednesday during another survey in the interior and legal committee of the state parliament. He clearly distances himself from right-wing extremism. He rejects any form of völkisch or völkisch-nationalist efforts.

Carstens spoke to the MPs about his membership in the Innsbruck corps "Gothia". He lived in their student residence in the 2007/2008 winter semester and took part in the corps’ Christmas celebrations in 2017 and 2019. According to information from the documentation archive of the Austrian resistance, there is also a former FPÖ functionary who was thrown out by the party because he is said to have exhibited Nazi memorabilia in his pharmacy.

He found out about the allegations against the man in 2017, said Carstens. "I was never at his house, nor in his pharmacy." Because "Gothia" is only the second student association for him after his membership at Irminsul in Hamburg, he has fewer connections to it.

The SPD had put the issue back on the agenda. Carstens was "maximally unreasonable" in the committee, said the SPD judicial politician Marc Timmer. It was "completely incomprehensible why Dr. Carstens did not resign when he became aware of the right-wing extremist circumstances, including his corps brother’s collection of Nazi memorabilia.” It is even more incomprehensible why Carstens still does not want to draw any conclusions.

According to Carsten's statements, the FDP domestic politician Bernd Buchholz felt encouraged that he was unsuitable for the office of state secretary. "It's not about what Otto Carstens does privately, but what political stance he represents and I have a clear sense of disturbance." Now Prime Minister Daniel Günther (CDU) is asked to look for a suitable State Secretary.

The CDU justice politician Lukas Kilian accused the SPD of "continued dirty things". The faction is trying to keep the topic going.

Carstens had come under massive pressure, among other things, because of allegations of plagiarism in connection with his doctoral thesis, dubious statements about the prison system and his membership in the violent Irminsul student fraternity in Hamburg. This had taken part in fencing events at the same time as the Germania fraternity, which was classified as right-wing extremist by the Office for the Protection of the Constitution and was therefore observed, but which Carstens has now declared to be over.

Carstens also referred to the vehement criticism from judges and prosecutors in the north. He was concerned that "parts of the judiciary met with a lack of understanding and some rejection". He has already spoken to both judges' associations.

‹ ›
Keywords:
SchleswigHolsteinCarstensOttoStudentenverbindungenVerfassungsschutzberichteCDURechtsextremismusHamburgSPDKrimiInnsbrucker Corps GothiaIrminsulOtto Carsten
Your comment has been forwarded to the administrator for approval.×
Warning! Will constitute a criminal offense, illegal, threatening, offensive, insulting and swearing, derogatory, defamatory, vulgar, pornographic, indecent, personality rights, damaging or similar nature in the nature of all kinds of financial content, legal, criminal and administrative responsibility for the content of the sender member / members are belong.
Related News