Italy is "fully part of Europe and the Western world", she forcefully affirmed on Tuesday during her general policy speech to the deputies. 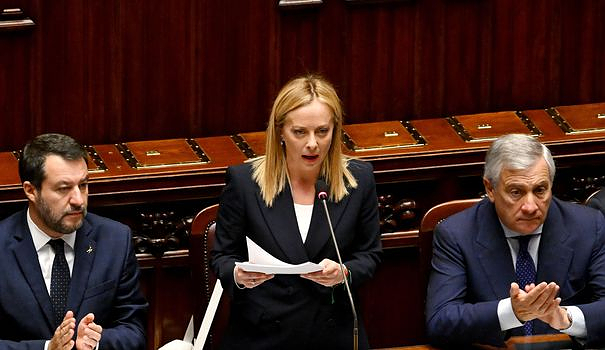 Italy is "fully part of Europe and the Western world", she forcefully affirmed on Tuesday during her general policy speech to the deputies.

"I have never had any sympathy or closeness to anti-democratic regimes. For any regime, including fascism", also insisted on underlining the one who was an admirer of Mussolini in her youth, even if in August she assured that the right had "relegated fascism to history".

The first female head of government in the history of Italy also promised that Italy would remain "a reliable partner of NATO in support of Ukraine, which opposes Russian aggression".

These statements are clearly aimed at reassuring Brussels and Rome's partners, while Ms Meloni has pro-Russian partners in her coalition, including League leader Matteo Salvini and Forza Italia leader Silvio Berlusconi, a personal friend of Vladimir Putin.

"Those who think that it is possible to exchange our tranquility for the freedom of Ukraine are mistaken," she assured from the tribune of the hemicycle, standing in her black suit.

"Caving in to Putin's energy blackmail wouldn't solve the problem, it would make it worse, paving the way for further claims and blackmail and future energy (price) increases even bigger than we've seen. the past few months,” she said.

As far as the European Union is concerned, she explained that the Italian approach was not to “hinder and sabotage European integration” but to make the Community machine work better.

“Italy will respect the” European rules, also assured Ms. Meloni, even if Rome also wants “to help change those that do not work”. The EU is "a common house to face the challenges that member states can hardly face alone", she added, judging that the EU has not done enough in this area in the past.

“Whoever wonders” about the shortcomings of the EU “is not an enemy or a heretic but someone who wants to contribute to a more effective European integration to face the great challenges that await it”, said Ms. Meloni.

The speech of Ms. Meloni, who took office on Sunday, will be followed by a vote of confidence, Tuesday evening in the Chamber of Deputies and then Wednesday in the Senate. She is sure to win since her coalition has an absolute majority in both chambers.

As inflation rages, she undertook as a "priority" to "strengthen support measures for households and businesses, both for energy bills and for fuel".

"A financial commitment which will drain a large part of the available resources", she acknowledged while the debt reached 150% of GDP, the highest ratio in the euro zone after Greece, and that Italy should enter a recession in 2023.

“The solution to reducing the debt is not blind austerity (…) but sustainable and structural economic growth,” said the Prime Minister, whose speech was regularly interrupted by rounds of applause.

Inflation increased by 8.9% year on year in September and Italy was particularly affected by the energy crisis due to its dependence on Russian gas imports.

At the same time, she wants to "reduce the tax burden on businesses and households", while "the excessive weight of taxation is one of the main obstacles to job creation and the competitiveness of our companies on international markets. ".

Regarding the windfall of nearly 200 billion euros in grants and loans granted by the European Union as part of its post-pandemic recovery fund, she pledged to spend them “at best by negotiating with the Commission European Union the necessary adjustments (...) in the light above all of the rise in commodity prices and the energy crisis".

On illegal immigration, a battle horse of the far right, she affirmed her government's desire to "stop illegal departures (from Africa, editor's note) and put an end to human trafficking" by Mediterranean.