Massacre in the DRC: the government evokes "around 300 dead"

This figure was put forward by the Congolese Minister of Industry, Julien Paluku, governor of North Kivu (east) from 2007 to 2019, during a press briefing hosted by the Minister of Communication and government spokesperson. 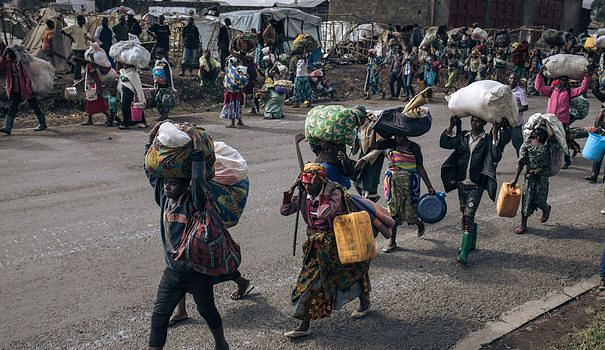 This figure was put forward by the Congolese Minister of Industry, Julien Paluku, governor of North Kivu (east) from 2007 to 2019, during a press briefing hosted by the Minister of Communication and government spokesperson. , Patrick Muyaya.

The army had accused Thursday the M23 of having massacred at least 50 civilians in this village of North Kivu, assessment that the government established the next day at "more than a hundred" dead.

Residents interviewed by telephone by AFP said they had to, at the request of the rebels, bury the victims in mass graves.

The rebel movement rejected the accusations of the Congolese authorities and acknowledged the death of eight civilians in this village, killed according to it by "stray bullets" during fights with militiamen.

To explain the new figures in possession of the government, MM. Paluku and Muyaya said they came from civil society and an "organization that brings together all the communities" in the region.

"Each community was able to identify, through the antennas which are in Kishishe and surroundings, the people who died", explained Mr. Paluku. “One community alone has over 105 people killed,” he said.

In his introductory remarks, the Minister of Industry spoke of some "272 civilians killed".

"There are children who were killed, in a church, in a hospital", specified Patrick Muyaya, evoking the figure of 17, "according to the first elements given".

"There are difficulties in cross-checking all the figures", he said, "the area is under M23 occupation". "Consolidation work is underway," he added. Investigations have been requested, the two ministers stressed.

The M23, a former Tutsi rebellion defeated in 2013, took up arms again at the end of last year and in recent months has conquered large portions of territory north of Goma, capital of North Kivu province.

Kinshasa accuses Kigali of supporting this rebellion, which UN experts and American officials have also pointed out, but Rwanda consistently denies it, accusing Kinshasa, which also denies, of collusion with the FDLR, a movement formed by certain perpetrators of the Tutsi genocide in 1994 in Rwanda.

On Monday, Washington announced that US Secretary of State Antony Blinken, in an appeal the day before to Rwandan President Paul Kagame, had urged the latter to cease "all support" for M23, expressing "deep concern about the impact of the fighting on Congolese civilians, who have been killed, injured, or displaced".

He also called for respect for the agreement negotiated through Angola.

A November 23 summit in Luanda ordered a ceasefire followed by the withdrawal of M23 from captured positions, but no withdrawal has been observed to date.

In memory of the victims of Kishishe, the Congolese government had decreed three days of national mourning, which ended on Monday. In the evening in Goma, young people gathered in the city center and silently placed candles on the ground forming a map of the DRC.