Massacre in Thailand: On the second day of funeral rituals, families kneel in a ceremony

Former policeman Panya Khamrab, armed with a gun and a long knife, killed 36 people, including 24 children, in the eastern province of Nong Bua Lam Phu on Thursday, making one of the of the worst mass killings in Thailand. 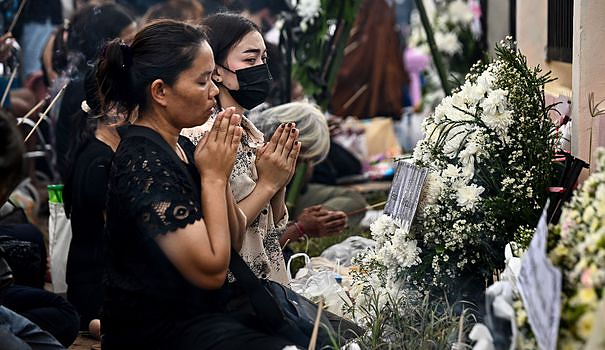 Former policeman Panya Khamrab, armed with a gun and a long knife, killed 36 people, including 24 children, in the eastern province of Nong Bua Lam Phu on Thursday, making one of the of the worst mass killings in Thailand.

Monks dressed in saffron robes led prayers for the dead on Sunday at a temple near the nursery in Na Klang district, a usually peaceful agricultural area.

Earlier, families knelt in tears outside the nursery during a ceremony to free the souls of their children.

Some held portraits of their children, toys and food, before arranging them outside the enclosure as offerings, where heaps of flowers accumulated and the scent of incense spread.

Officials solemnly carried the children's most cherished possessions out of the nursery to return them to families: blankets, toys, all carefully placed in bags labeled with the children's names.

The carnage began when the assailant forced the entrance to the nursery on Thursday, at nap time for the children. The 34-year-old then made his way to his home, killing his wife and son before committing suicide, police said.

Most of the victims died from wounds inflicted by gunshots or stab wounds.

Prime Minister Prayut Chan-O-Cha, who is due to join prayers on Sunday evening, has ordered a speedy investigation into the massacre. Police said they would interview 180 witnesses in the coming days.

The shooter was fired from the police this year for drug abuse.

Several people in this rural province told AFP that he was known for his methamphetamine addiction. Initial samples taken from the assailant's body, however, did not reveal the presence of drugs in his body.

King Maha Vajiralongkorn met survivors and relatives of the victims at the hospital on Friday evening in a rare visit to his subjects.

The king said he "shared the pain" of the families and promised to support them.