The department of Marne was not one of the departments placed on yellow vigilance with strong winds by Météo-France. 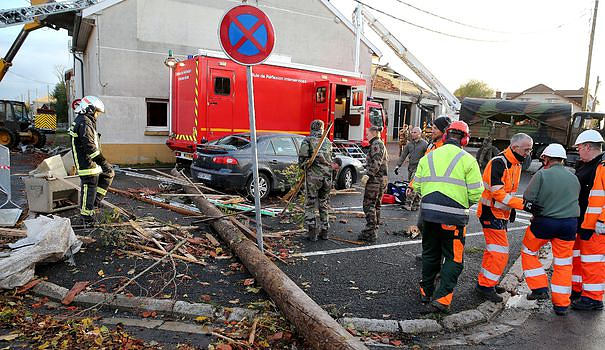 The department of Marne was not one of the departments placed on yellow vigilance with strong winds by Météo-France.

Around 1:30 p.m., "a mini tornado" "crossed the village" from south-west to north-east, "on a corridor about 50 to 100 meters" wide, causing damage to "about fifty buildings, mainly at the level of the roofs", summarized on the spot, around 6:00 p.m., Lieutenant-Colonel Philippe Moureau, commander of the relief operations.

Three buildings are "particularly affected", including the fire station, a hangar and a detached house, said this firefighter officer. "No casualties were reported.

“Sixty personnel” and “26 machines” were mobilized by the firefighters, including “special teams”, in particular a rescue group in dangerous environments and drones.

A statement from the fire department had earlier reported "violent, tornado-like winds", stating that the fire and rescue center was "more than 50% destroyed".

"It was a violent, very short, absolutely unpredictable phenomenon" which "caused very strong damage", also described, on the spot, the prefect of the Marne, Henri Prévost. To deplore no injuries, "it's an incredible opportunity".

“The fire station is undoubtedly the most impacted structure”, and “we are committed to restoring it as quickly as possible”, he said. "The other houses vary, from a few tiles to chimneys, or parts of structures that have been lifted".

"There is no request for relocation at this stage, people will in principle be able to return home", and the emergency services "finish the securing" of the streets, he continued.

In this city of 3,800 inhabitants, "180 electricity meter points" are cut and some homes could "remain without power until tomorrow morning", he added.

Around the barracks in the early evening, tiles and debris cluttered the road, a few trees were on the ground and windshields and car hoods were dented, noted an AFP correspondent.

"It lasted two minutes. In my garden, the pergola is lying, the garden shed at the neighbor's, and my car exploded," said a resident, Renée, 60, refusing to give her name. When a tornado approaches, "you see death coming. My husband closed the window, I thought the wall was going to fall," she shuddered.

On October 23, strong winds and at least one tornado hit fifteen municipalities in Oise, Somme and Pas-de-Calais, damaging hundreds of houses and slightly injuring a child. In Bihucourt, a village of 350 inhabitants among the most affected, 90 homes were affected, including 48 that had become uninhabitable.