Maradona: the ball touched by the "hand of God" at auction

Auctions will start on November 16, for which potential buyers can register online from October 28, the firm said, adding that it expected a sale of between £2. 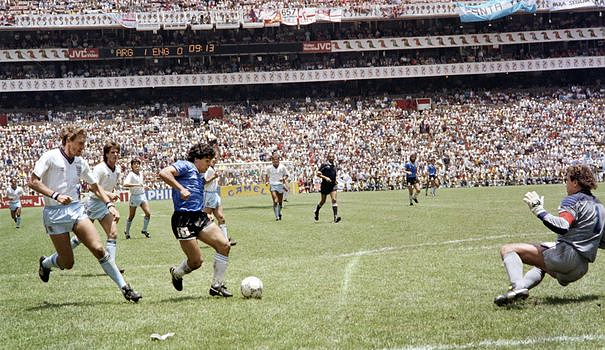 Auctions will start on November 16, for which potential buyers can register online from October 28, the firm said, adding that it expected a sale of between £2.5m and £3m. (between 2.8 and 3.4 million euros).

“With the history surrounding the ball, we expect this lot to be extremely popular when it comes to auction,” auction house executive Graham Budd said in a statement.

This ball was used on June 22, 1986 in the memorable quarter-final between Argentina and England (2-1) at the World Cup in Mexico, a match played four years after the Falklands war between the two countries .

But it was Maradona's incredible double, in the 51st and 55th minutes, that tipped the match into football history and collective memory. The Argentine captain had scored his first goal with his left fist and thus deceived goalkeeper Peter Shilton. He will later admit to having scored "a little with the head and a little with the hand of God".

For his second achievement, Maradona started from his camp, dropped five opponents and concluded in a tight angle, to score what was consecrated "goal of the century" by a Fifa poll in 2002.

Argentina then won the tournament under the impetus of its brilliant playmaker, who on this occasion became one of the very best players in history.

"This ball is part of the history of international football. It is undoubtedly the right time to share it with the world", said its owner, who is none other than the referee of this famous match, the Tunisian Ali Bennaceur, according to the auction house.

"I didn't see the hand, but I had a doubt," Mr. Bennaceur told AFP a few days after Maradona's death in November 2020, at the age of 60. "You can see the images, I stepped back to take the advice of my second, the Bulgarian Dotchev, and when he confirmed that it was good, I gave up the goal," he said.

In May, the jersey Maradona wore during that game sold at auction for $9.3 million, more than double the price expected by Sotheby's.

That record was then broken by the September sale of basketball legend Michael Jordan's jersey for $10.1 million.