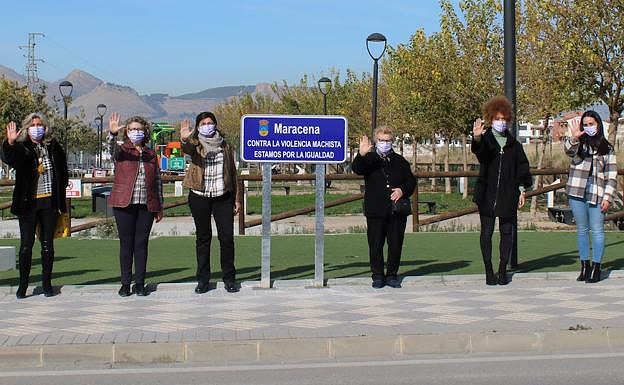 Maracena's City Council presented today its awareness campaign to mark 25-N, International Day Against Violence Against Women. It highlights 23 signs featuring slogans supporting equality at various strategic locations in the city. The signs will be part of the municipal aesthetic forever and send a double message: Give way to equality and end sexist violence.

Different personalities from Maracena's sport and culture worlds wanted to take part in the 25-N events. They also participated in a video produced by Consistory that showed their rejection of gender violence. Angel Jimenez is a goalkeeper for the Granada C.F subsidiary. He is a Maracenero and has recently made his debut at the First Division.

Noel Lopez (Mayor of Maracena), stated that "from the City Council, we must continue conveying to the victims that they're not alone and that every level of the administration is working to eradicate violence." It is important to place the signs where there is the most minor involvement, like schools and parks. Also, in areas that see the greatest amount of traffic, such at the entrance and exit of the municipality, or emblematic squares. This will make the cause visible and reach the young motors of change.

Ana Tinas (Councilor for Equality) has stressed the importance of talking to boys and girls about how they can relate and on occasion, normalize those behaviors through reflective dialogues in schools. In all schools in the municipality, there have been different competitions for drawing, slogan creation, and stories. The Councilor read the manifesto as part of the acts of commémoration of 25-N.

‹ ›
Keywords:
MaracenaInstalaSenalesLemasFavorIgualdad
Your comment has been forwarded to the administrator for approval.×
Warning! Will constitute a criminal offense, illegal, threatening, offensive, insulting and swearing, derogatory, defamatory, vulgar, pornographic, indecent, personality rights, damaging or similar nature in the nature of all kinds of financial content, legal, criminal and administrative responsibility for the content of the sender member / members are belong.
Related News