Many thousands of Ejidenses dive into the White Night

On Friday night, thousands of residents of Ejido took to the streets to witness the White Night's intensity. 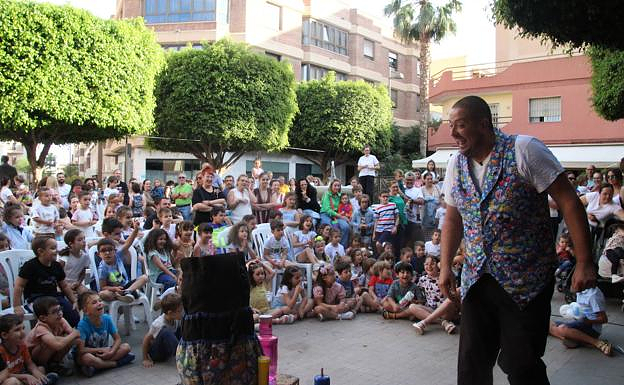 On Friday night, thousands of residents of Ejido took to the streets to witness the White Night's intensity. Two years later, the appointment was rescheduled to take advantage of the outstanding commercial, service and gastronomic offerings of the municipality. It also served as a unique platform to promote consumption and purchases in a festive environment.

So, under the slogan "The Street is full of dreams", more than 100 ideas were created in streets, squares, public spaces, and commercial establishments. The final touch was the Nia Correia concert.

Plaza de la Iglesia, which brought together the most people during the afternoon, offered a wide variety of activities for children such as Maxidisco and a soap bubble workshop as well as ballooning. The Antonio Mira square, through which Circo Zas, Viva Circus and Aire y Fuego all passed, was a fantastic circus.

Another attraction that was a focal point of attention was Plaza Mayor, which featured a giant table football that children and young people played throughout the afternoon. This was also the place where the youth space was located, where hip-hop dance proposals were concentrated, including with Samsari Danza and Arand-B.

The Plaza Mayor hosted several food trucks, which completed the gastronomic offering. In the Plaza de la Constitucion, the Garrido churreria was also installed. At the Plaza Teatro, it was possible for people to enjoy the sounds of Jose Garcia and Carlene Graham's concert.

The City Council and the establishments under the hashtag created a very diverse and comprehensive program.

Participation in this event was successful after it returned from the pandemic. This was due to the high quality performances and the excellent commercial and hospitality offerings of the municipalities that filled the establishments. All shops offered raffles, as well as special offers and promotions.

The aerial dance performance of Subcielo, a company that specializes in aerial dancing, was one of the most memorable events for residents of Ejido. It took place on the façade of El Ejido City Hall.

The night's final touch had an extra touch. It was the concert of Nia Correia. She won Operacion Triunfo's last edition and was the female lead in Musical The Lion King for many years. Also, she was a finalist from the most recent edition of Tu Cara Me Suena. An extremely versatile artist, with great voice power and who was able to conquer the public from Ejido.

‹ ›
Keywords:
MilesEjidensesLanzanNocheBlanco
Your comment has been forwarded to the administrator for approval.×
Warning! Will constitute a criminal offense, illegal, threatening, offensive, insulting and swearing, derogatory, defamatory, vulgar, pornographic, indecent, personality rights, damaging or similar nature in the nature of all kinds of financial content, legal, criminal and administrative responsibility for the content of the sender member / members are belong.
Related News