Making nursing homes a home is the challenge

The concept of a nursing home is a place for helpless people without family or resources. 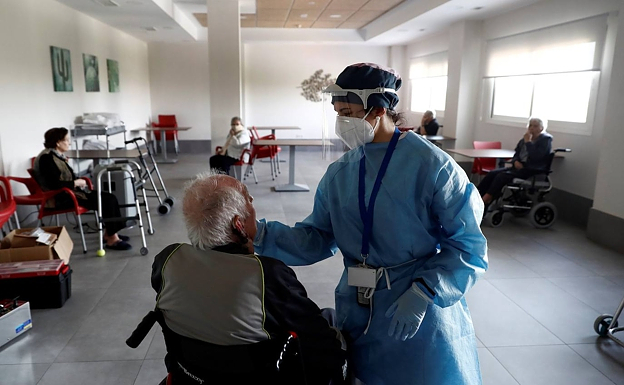 The concept of a nursing home is a place for helpless people without family or resources. Although the terminology has changed, the legacy of these institutions, the nursing homes continue to preserve the memories of past times. The pandemic exposed the flaws of the model that allowed overcrowding, which favored covid spread and high mortality. This lesson has forced administrations to reflect.

Both the Government and autonomous communities are looking to change the system 180 degrees. The centers should adapt to the needs and wishes of seniors who live there for the final stretch of their lives. One common diagnosis is that staff who care for dependents at these institutions are not well-paid and don't have the necessary training. Spain joins the growing list of countries who are changing their model.

Data from the Group of the Research Group on Aging of the Higher Council for Scientific Research, (GIE-CSIC) shows that there are 6,240 centers in Spain where meals and accommodation are provided for people over 80. These entities have 391,000 spaces, and 281,000 users. 70% of these are women.

Jose Augusto Garcia Navarro is the president of Spanish Society of Geriatrics and Gerontology. He said that the agreement between the Ministry of Social Rights and autonomous communities was "a first step towards long-term care." The European Union (EU) and the World Health Organization(WHO), both support the right of the elderly to live in their homes. When they have to move, the residence should be as close as possible to their home.

Spain is now looking at Denmark as a mirror, with its approved document allowing for 15 cohabitants to be created in residential units. Denmark has small elderly centers and strong home care. Garcia Navarro says that while home care in Spain is generally limited to 40 minutes per day, Denmark provides a total of 3.1 hours for the elderly to move, dress, and bathe.

To be able to identify ourselves with the Scandinavians, we must make a significant economic effort. Spain's long-term care spending is 0.74% of its GDP, while that average EU country spends 1.5%. There is more: The eight wealthiest EU countries spend 2.5% on long-term care.

The Government received ten votes for and nine against to approve the Territorial Council of Social Services' document of minimum requirements. This document is intended to ensure the quality and accreditation of dependent care centers and services. New residences must now have at least 65% single-room occupancy and one caregiver for every two inmates. The staff ratio should increase to 60%. Vicente Rodriguez, who is a member the CSIC Aging Research Group applauds these measures, but he expresses his doubts about the homes that have been built. It is certain that none of this will happen in the near future. Rodriguez says that it is not clear if it will be easy to adapt existing centers which might have architectural and space organisation restrictions to meet the new requirements to create coexistence units of 15 people.

Cinta Pascual is president of the Business Circle for Attention to People.

It is difficult to balance service excellence and business profitability in a model such as the current one. CSIC estimates that 73% of places in the country are owned by private individuals, while 27% are public. These numbers were based on data from 2019. Public residences aren't always managed by employees from the various administrations. They occupy only 13%.

"The most successful model is one that focuses solely on the individual, as long as the criteria is in the approved document. Person-centered care can be very challenging from the perspective of facility requirements. Rodriguez adds, "I don't know if the criteria in the theoretical model would be met."

According to businessmen, the Executive gave the go-ahead for a plan but did not provide sufficient financial support. Cinta Pascual (President of the Business Circle for Attention to People) says bluntly that the Government must ensure that the new model doesn't cost users more.

There are currently 9.4 million people 65 and older. Experts predict that this number will increase by two-thirds in the next ten years. A recent 'Manifesto for Healthy Aging in Spain' estimates that the number of elderly people will rise by two million in the next ten year.

Garcia Navarro advocates for better coordination of health and social services. This requires greater involvement by the Ministry of Health. Many people who arrive at the residences are in their final stages of life. According to the latest research, they are more likely to arrive at the residences with nine chronic conditions. While it is a significant step forward, we still need more caregivers.

‹ ›
Keywords:
DesafioResidenciasMayoresHogar
Your comment has been forwarded to the administrator for approval.×
Warning! Will constitute a criminal offense, illegal, threatening, offensive, insulting and swearing, derogatory, defamatory, vulgar, pornographic, indecent, personality rights, damaging or similar nature in the nature of all kinds of financial content, legal, criminal and administrative responsibility for the content of the sender member / members are belong.
Related News