Carnival of colors, slogans and brightness. 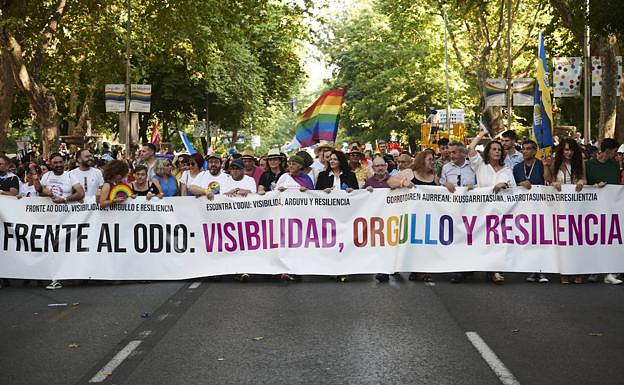 Carnival of colors, slogans and brightness. Rainbows rule, there is no place in the world for greys. Many are adorned with huge feathers. Some wore multicolored flags, such as a pareo or cape. Drums, dance, and banners. Joy and vindication have conquered the streets. Pride is back. Once again, the great LGTBI state demonstration was dominated by the shouts, hugs, and kisses. Two years of being invisible due to social restrictions caused the covid pandemic led to hundreds of thousands of people, one million according the organizers, packing the centre of Madrid on Saturday to show everyone that the wardrobe is not an option.

The march covered four and a quarter kilometers between the Plaza de Colon and Atocha roundabout for more than two hours. It began at seven in the afternoon, behind the banner that featured the main motto of the edition, "In the face of hatred, Pride, visibility, and resilience". The representatives of the major LGTBI organizations carried it, and along with them marched the leaders of trade unions and associations, as well as NGOs, who are the spokespersons of civil society. A third block contained the leaders of all political parties, except PP or Vox. These included socialist ministers like Diana Morant, Fernando Grande-Marlaska and Pilar Alegria or Podemos members Ione Belarra or Irene Montero.

Uge Sangil (president of the LGTBI State Federation) was charged with reading the manifesto. She demanded that Parliament approve the 'Trans law,' which the Government had just sent to her, and that politicians sign a State pact against hate expression. Concerning the first, she said that the rule was similar to the 2005 same-sex marriage law and that it was a historic moment. She asked for speed because the rights of lesbians and bisexuals, gays as well as intersex people, depend on their approval.

Concerning the second, which is the rise in homophobic attacks, and hate speech, he said that Pride 2022 had honored Samuel Luiz who was beaten to death in La Coruna by a mob angry that he was "faggot". Sangil stated that many people have been accused and attacked for their love of diversity, and for it.

The leader of the LGTBI movement, however, did not ignore the danger that Vox and other right-wing groups pose to her faith in retrograde and sexist speech. She concluded, however, that she believed "we were going to win convincing society." We will win with the hope of equality.

Each face expressed a desire to return home. This was evident in the flurry of emotions seen along the route and in the ambition and deployment that led to the second and natural continuation of this march. The colorful protest parade saw more than 100 participants, 1000 volunteers, and 40 floats. This was a record.

One of the floats was that of the RTVE corporation and the Eurovisionist Chanel was there. This was almost as much anticipation as the search for Karol G (Colombia), who surprised everyone by revealing that she was on the float.

The march was the cherry on top of more than a week-long Pride celebrations in Madrid, which has been a global benchmark for this protest party for many years. This Saturday's demonstration was made evident by the presence of streets filled with people of different nationalities and languages, as well as those who were visible in the alleyways and squares of Chueca in previous days.

‹ ›
Keywords:
MadridRecuperaMarchaOrgulloReivindicativaPidiendoVisibilidadFrenteOdio
Your comment has been forwarded to the administrator for approval.×
Warning! Will constitute a criminal offense, illegal, threatening, offensive, insulting and swearing, derogatory, defamatory, vulgar, pornographic, indecent, personality rights, damaging or similar nature in the nature of all kinds of financial content, legal, criminal and administrative responsibility for the content of the sender member / members are belong.
Related News