Macron's trip to Washington: "The objective is to redefine the Franco-American relationship"

Behind the splendor of this state visit, a single watchword: abandon past annoyances. 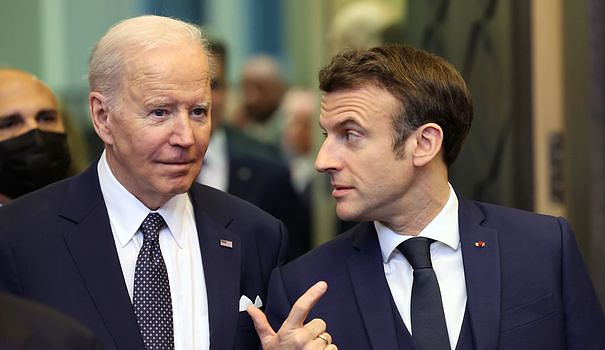 Behind the splendor of this state visit, a single watchword: abandon past annoyances. President Emmanuel Macron is going to the United States from this Wednesday, November 30 to meet his American counterpart Joe Biden. The two heads of state hope to turn the page on the affair of the Franco-Australian submarines, which had caused a bilateral crisis. If Washington and Paris want to pick up the pieces of their old friendship, the French president also intends to address angry subjects.

On the agenda, the question of the impact of the war in Ukraine, which is fueling tensions between Paris and Washington, as well as the Inflation Reduction Act (IRA), strongly criticized by Europeans. Macron's objective will be to show the White House that he is a reliable partner, while asserting his posture of non-alignment. Benjamin Haddad, Renaissance deputy for Paris and researcher in international relations, evokes "tumultuous" but "frank" relations between the two partners.

L'Express: What does this second state visit for Emmanuel Macron to the United States symbolize since 2017?

Benjamin Haddad: It is a strong and rare symbol. This is Emmanuel Macron's second state visit to the United States and the first under Joe Biden. The initiative shows the credit given to the French president by the White House, whether it is his activism on the international scene or his message of a Europe that assumes responsibility and defends its interests. Historically, Americans relied heavily on the British or the Germans. From now on, London has left the European Union and the Americans have strategic priorities which are evolving, far from the European continent, towards systemic rivalry with China.

In this respect, having a Europe capable of defending its own security, which the French president has been defending since 2017, can appeal to the ranks of the progressive Democratic left, but also within the Trumpist right. The Americans realize, slowly but surely, that they need a Europe capable of defending itself, of no longer depending on them, and Emmanuel Macron is the best spokesperson for this. The latter, despite the disagreements that there may be with the Americans, is perceived as an ally who counts, militarily or commercially. The bilateral relationship between France and the United States has been very close and effective, particularly in the fight against terrorism in Africa or the Levant, and today in the support given to Ukraine.

However, several thorny subjects could darken the discussions...

There is no shortage of points of disagreement and the president will be the voice of Europeans in the face of the protectionism of the Biden administration. There is the Inflation Reduction Act (IRA), a plan of subsidies from the United States and massive support of 369 billion dollars to a certain number of industries (electric vehicle, semiconductor) on the condition of to buy American. It's interesting to see the continuity between the Trump administration and that of Biden in this protectionist dimension. On this subject, we need a very frank transatlantic dialogue: the inflationary crisis that our democracies are going through should not be a pretext for the Americans to massively subsidize their industry to the detriment of their partners and their allies.

Coming back to the Inflation Reduction Act, there are two approaches. First of all, we can reflect with Washington on exemptions or even on a common energy support strategy and certain numbers of innovative cutting-edge industries. Then, Brussels should not hesitate to create its own common support plan for innovation and its industry in particular on these energy issues, a Buy European Act. Europeans should not be naïve or follow the Americans on this, and that is the whole message that France is sending to Europe and the United States. Being allies does not mean not saying things to each other, on the contrary.

Furthermore, the issue of energy will also be on the table. In terms of energy, we can never return to normal with the Russia of Vladimir Putin, who used energy links as a weapon, a lever of influence on our democracies. Today, American liquefied natural gas (LNG) is imported at high prices, because we often have to deal with private players and alternative demand from Asian markets, which drives prices up. Europeans must diversify their suppliers as much as possible, and invest in the long term in renewables and nuclear energy. This search for alternatives must be accompanied by a dialogue with the American authorities on this subject.

What future for Franco-American relations?

Beyond the immediate issues - Ukraine, IRA, energy... - the long-term objective of this trip is to redefine the transatlantic relationship, towards a more balanced relationship with a more autonomous Europe. It is in the interest of both parties. Europe has become a fairly secondary factor for the Americans, and this vision will be reinforced if the Republicans come to power in the next elections scheduled for 2024. For their part, the Europeans must draw the necessary conclusions. Admittedly, Washington has been called back to Europe by the Ukrainian crisis, but its gaze is elsewhere, particularly in the Indo-Pacific.

Redefining the transatlantic alliance is also a way of saving it. We may have disagreements or divergent commercial interests, but it is in the interests of Europeans to have strong and autonomous partners, especially when they have other priority theatres. It requires Americans to think of their alliance differently, as a partnership rather than a vassalage. That will depend on the ability of Europeans to assert themselves. The pivot from the United States to France can act as a gateway to a better defined and more balanced relationship.