Macron in the United States: "We need to know how to become brothers in arms again"

Presidents Joe Biden and Emmanuel Macron forcefully displayed on Thursday, December 1, the solidity of the alliance between the United States and France, "two sister nations in their defense of freedom", despite differences in particular on the recovery project. 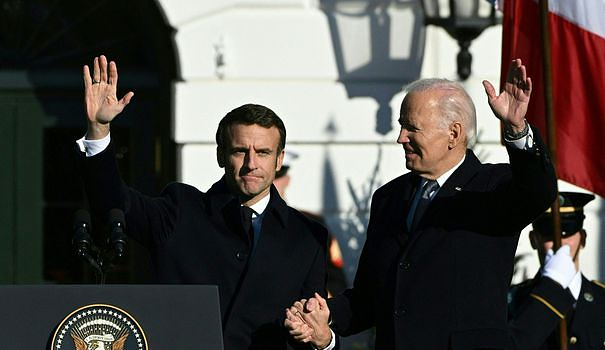 Presidents Joe Biden and Emmanuel Macron forcefully displayed on Thursday, December 1, the solidity of the alliance between the United States and France, "two sister nations in their defense of freedom", despite differences in particular on the recovery project. American industrialist, deemed "aggressive" by Paris.

"The United States could not ask for a better partner to work with than France," said the American president in a brief statement, stressing that the alliance with France remained "essential". "Our common destiny is to respond together" to the challenges of the world, said the French president for his part. "Our two nations are sisters in their defense of freedom."

Emmanuel Macron and his wife Brigitte were received with great fanfare at the White House by the American president with all the pageantry associated with a state visit.

Cannon shots and national anthems on his arrival, fireside meeting in the Oval Office, joint press conference and gala dinner: everything was carefully calibrated to show goodwill.

Emmanuel Macron is the first to whom the American president has reserved such treatment since his inauguration in January 2021. The octogenarian Democrat is strong, after the convulsions of the presidency of Donald Trump, to strengthen ties with the traditional partners of the States- United, including their "oldest ally", the formula devoted to Washington to designate France.

However, it did not start very well with his French counterpart. In September 2021, the United States announced a spectacular new military alliance with the United Kingdom and Australia, AUKUS, blowing France a huge submarine contract with Canberra. Joe Biden, without going back in the least on the merits of the decision, had recognized a "clumsiness". He has since done everything to appease Emmanuel Macron, a process which analysts say culminates in this solemn welcome to Washington. The French president also stressed on arriving Thursday morning that France and the United States should "become brothers in arms again". The two countries "are the strongest allies because this friendship is rooted through the centuries", affirmed the French leader.

Other disputes should be discussed during this visit. Emmanuel Macron thus deplored on Wednesday in a particularly offensive tone the "super aggressive" economic decisions for European companies by his American counterpart. The United States and the European Union "are not on an equal footing" because of the subsidies to American companies provided for in the major climate plan of the Democratic president, he again regretted Thursday, interviewed by ABC .

Joe Biden wants to revitalize his industry and reassure a middle class shaken by globalization, while standing up to Beijing. This requires an uninhibited defense of American interests, on the military level - which AUKUS illustrated - as well as industrial.

Emmanuel Macron judged on Wednesday that the "risk is that faced with the challenges of the time, the United States first looks at the United States, it's normal (...) and then looks at the rivalry with the China, and, in a way, that Europe and France become a sort of adjustment variable". In particular, the American president passed a gigantic investment program, the "Inflation Reduction Act", which plans to subsidize electric cars... as long as they are "Made in the USA."

"You may be going to solve your problem, but you will make mine worse," Emmanuel Macron told American parliamentarians, insisting on the need for France also to support the middle class and employment. These choices "will fragment the West", he then hammered before the French community. They "can only work if there is coordination between us, if we decide together, if we resynchronize".

After this charge, Emmanuel and Brigitte Macron went to dinner with Joe and Jill Biden in an Italian restaurant in Washington for a moment that was both private and "political", according to an adviser to the Elysée. He assured that the French president would make this same "central remark" to his host, himself very attached to the fate of the "middle class". Beyond these discussions, the two leaders will certainly want to display their agreement on the response to be given to the invasion of Ukraine by Russia.

And it will be interesting to hear them on China: Washington would like the Europeans to share more of its concern over Beijing's all-out rise to power, but France is keen to chart its own diplomatic path.

These serious questions will be put aside for a moment during a gala dinner on Thursday evening. On tables loaded with candlesticks and flowers in the colors of the two countries will be served lobster, beef and an orange cake. But also – and First Lady Jill Biden particularly insisted on this point – American cheeses. Including a blue from Oregon which was the first American production to win the World Cheese Championships in 2019.