Macron in contact with mayors, between appeasement and high expectations

This year, the Elysée says it wants to innovate: no closing speech at the 104th congress of the Association of Mayors of France (AMF) for the Head of State – it will be delivered on Thursday by Prime Minister Elisabeth Borne – , but a long "wandering" of several hours at their show, organized parallel to the Parc des expositions de la Porte de Versailles with 1,200 exhibitors. 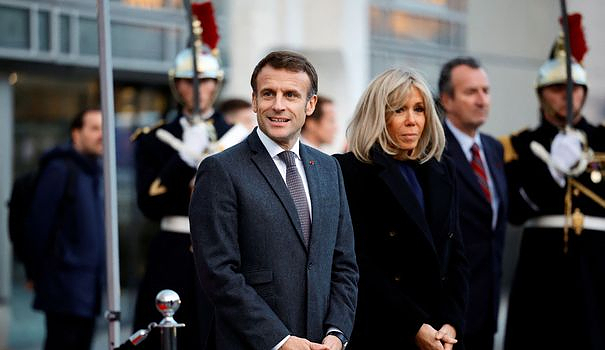 This year, the Elysée says it wants to innovate: no closing speech at the 104th congress of the Association of Mayors of France (AMF) for the Head of State – it will be delivered on Thursday by Prime Minister Elisabeth Borne – , but a long "wandering" of several hours at their show, organized parallel to the Parc des expositions de la Porte de Versailles with 1,200 exhibitors.

It is a question of going to meet those who "offer innovative solutions" and "to have a much more direct and strong contact", pleads the presidency.

Emmanuel Macron will speak in front of a thousand mayors, but in the evening during the now traditional reception at the Elysée. Home.

The choice of the staging makes some teeth cringe, especially in the opposition.

"He confuses the mayors' fair and the agricultural fair", deplores the socialist André Laignel, vice-president of the AMF, considering that "many colleagues" consider that "not to cross the aisle to come and see the mayors" to the congress, "it's a bad way".

Between the powerful association of elected officials and the president, the time is nevertheless for appeasement after a first five-year term marked by tensions.

AMF President David Lisnard, Les Républicains mayor of Cannes, believes that Emmanuel Macron has "completely changed" his speech by opening the door to "a new chapter of decentralization".

In Château-Gontier, in Mayenne, the President of the Republic said he was in favor in October of "true decentralization", accompanied by the transfer of "responsibilities", "normative power" and the necessary "funding" - as opposed to to the "false decentralization" in force according to him so far.

At the Elysée, on the contrary, we want to see in the improvement with the communities "the fruit" of the policies initiated five years ago in favor of financial support and a "return of the State to the territories", rather any turning point.

The executive highlights the opening of 2,600 France Services houses by the end of December (one hundred more than initially promised) or the creation of 35 additional sub-prefectures, including six this year.

The government has also multiplied its actions in recent weeks, with the announcement of an additional 1.2 billion euros to local authorities in the form of a loan to accelerate the ecological transition and that of five billion by 2026 to "revitalize" the center of 234 medium-sized towns.

Above all, Elisabeth Borne announced a higher than expected increase in the global operating grant (DGF) for local authorities in 2023, to 320 million euros, evoking an unprecedented effort for thirteen years.

Of "show off", retorted David Lisnard, who sees only a modest catch-up, the DGF not being "not indexed to inflation since 2010".

Elected officials are concerned about the abolition of taxes they collected, such as the housing tax on main residences and now the CVAE, a production tax. Municipalities are also now tempted by an increase in property tax, one of the only tax levers they still have.

Because the city councilors are also faced with the explosion of energy expenditure, due to the rising costs of electricity and gas in the wake of the war in Ukraine.

The government has set up an "electricity damper" and a "safety net" welcomed by the mayors, who are however awaiting details on their operation.

Before the presidential visit, the Elysée insisted on "reassuring" them by affirming that the State was indeed on "their side" to "help them overcome this obstacle".