Macron continues his visit to Algeria to "build the future"

The Head of State will go in the morning to the European cemetery Saint-Eugène, the main one in the capital during the time of the French colonization of Algeria, for a tribute to the soldiers "who died for France". 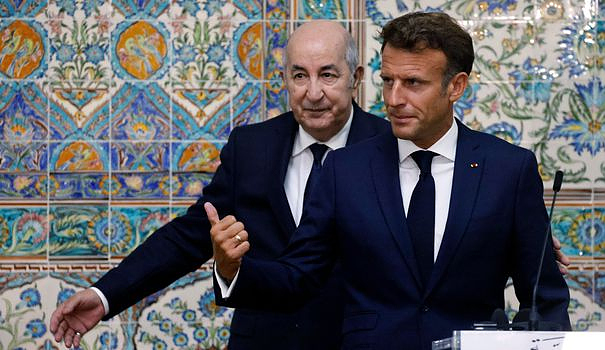 The Head of State will go in the morning to the European cemetery Saint-Eugène, the main one in the capital during the time of the French colonization of Algeria, for a tribute to the soldiers "who died for France".

Thursday, the first day of his visit, he had gathered at the memorial of the Algerian martyrs of the war of independence (1954-62) against France.

Another highlight of the day, placed under the sign of the relaunch of the bilateral partnership, he will meet young entrepreneurs with the ambition of creating a Franco-Algerian incubator of digital start-ups.

Emmanuel Macron will also visit the Great Mosque of Algiers, with its monumental minaret, before joining Oran (west), the country's second city renowned for its openness and creativity.

The French president and his Algerian counterpart Abdelmadjid Tebboune sealed their reconciliation on Thursday after months of diplomatic quarrel.

After a meeting of more than two hours, the two leaders showed courtesy and optimism.

Mr. Tebboune, who had gone to the airport to welcome his guest, welcomed the "encouraging results" which make it possible to "draw promising prospects in the special partnership that binds us".

France and Algeria will relaunch several intergovernmental committees, particularly in the economic and strategic fields, he announced.

The visit coincides with the 60th anniversary of the end of the war and the proclamation of Algeria's independence in 1962.

The French president underlined the desire of the two countries to look to the future and "work together on this" common past (...) complex, painful".

Algiers and Paris will create "a mixed commission of historians" in order to "look at the whole of this historical period", "from the beginning of colonization to the war of liberation, without taboo, with a will (...) to full access to our archives," Macron said.

The two leaders also discussed the situation in Mali, from where the French army has just withdrawn, the rest of the Sahel, Libya and Western Sahara which "require joint efforts to consolidate stability in the region", noted Mr. Tebboune.

Western Sahara, claimed by the separatists of the Polisario Front, exacerbates the regional rivalry between Algeria and Morocco, which claims the "Moroccanness" of this territory.

Deliveries of Algerian gas to Europe are also on everyone's mind, even if the Elysée assures that it is "not the object of the visit".

Since the start of the war in Ukraine, Algeria, the leading gas producer in Africa and one of the top ten in the world, has been in great demand by Europeans in a hurry to reduce their dependence on Russian gas.

This is the second time that Emmanuel Macron has visited Algeria as president, after a first visit in December 2017.

Relations between the two countries were then in good shape with a young French president, born after 1962, who had described French colonization as a "crime against humanity" before his election.

But they quickly petered out, overtaken by memories that were difficult to reconcile after 132 years of colonization, a bloody war and the departure of one million French people from Algeria in 1962.

The apologies expected by Algiers for colonization never came. In October 2021, remarks by Emmanuel Macron on the Algerian "politico-military system" and the Algerian nation caused a serious rupture.

The Elysée tenant has since made amends and the two presidents have gradually restarted the bilateral partnership.

But the delicate question of visas granted by France, the number of which has been halved, in particular continued to weigh on mutual relations.

Mr. Macron alluded to it on Thursday, referring to decisions taken for "chosen mobility" in favor of athletes, entrepreneurs or academics in order to "build more common projects".