Macron chairs the November 11 ceremony on the Champs-Elysées

The Head of State laid a wreath and gathered in front of the statue of Georges Clemenceau on the Champs-Élysées, a few meters from the presidential palace. 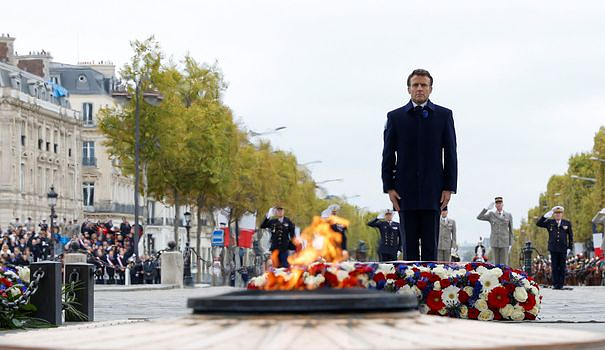 The Head of State laid a wreath and gathered in front of the statue of Georges Clemenceau on the Champs-Élysées, a few meters from the presidential palace.

He then reviewed the troops in Place Charles-de-Gaulle then rekindled the flame of the unknown soldier under the Arc de Triomphe, before calling the names of the soldiers who died for France since November 11, 2021.

The Head of State was welcomed at the Etoile by Prime Minister Élisabeth Borne, Minister for the Armed Forces Sébastien Lecornu, Secretaries of State Sarah El Haïry (Youth and Universal National Service) and Patricia Mirallès (Veterans and Remembrance ), and the army chief of staff Thierry Burkhard.

The ceremony was attended by former President Nicolas Sarkozy, President of the National Assembly Yaël Braun-Pivet, President of the Senate Gérard Larcher and Mayor of Paris Anne Hidalgo, whom the French President greeted in the company of his counterpart. Argentinian Alberto Fernandez.

Friday afternoon, Mr. Macron participated in the Forum for Peace which is being held at the Palais-Brongniart, before a closing dinner scheduled at the Élysée.

Ms. Borne, for her part, then presided over the celebration of the Armistice in the clearing of Compiègne (Oise) where it was signed on November 11, 1918 between France and its allies, and Germany, putting an end to the fighting. of the First World War.

"The memories of the First World War and that of the interwar period are more relevant than ever. At a time when the bombs are once again falling on Europe, they show us that resentment and the desire for power can obsess certain regimes to the point of tearing peoples apart and shedding blood," said the Prime Minister.

"They also remind us that certain values ​​must always be defended and that the cowardice of one day can cost the freedoms of the next day", continued Ms. Borne.

“I say: beware of those who flatter grudges, cultivate lies and fuel hatred. we of all those for whom division is a method and turning in on oneself, an ideal”, she warned.

"Our past and our present are full of so-called patriots who confuse the love of France with the rejection of others, who claim to be part of a history of which they rewrite every page. They are those illusionists who manipulate without shame and whose paths only lead to one direction: the precipice," added the head of government, implicitly targeting the far right.