Tomorrow Macael will host an updated edition of the historical reenactment "Stonemasons & Caciques in the Fighting for Marble" which celebrates and promotes the culture of the area, the province, and the province surrounding natural stone. 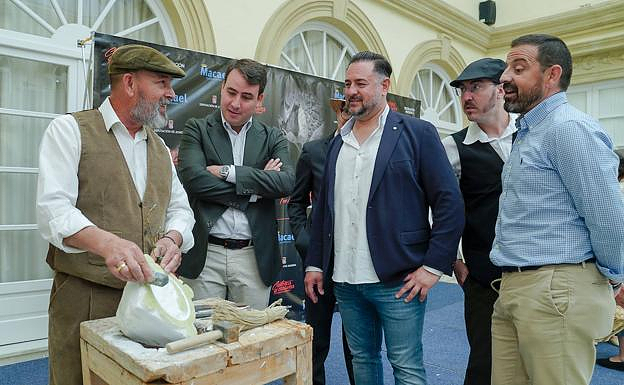 The public will be invited to travel back in time to 1919 to 1947 by more than 70 residents of the Almanzora. This is the period when the so-called lawsuit about the quarries occurred. It helps us understand the Macael of our times and the Almanzora. This recreation consists of 22 scenes, which are set in various enclaves within the municipality. It returns after two editions and is not able to be held because of the pandemic.

Yesterday's presentation featured Fernando Gimenez, Deputy for Presidency, Fight against Depopulation and Tourism; Raul Martinez, mayor of Macael and Guillermo Casquet, deputy mayor of the municipality. A group of stonemasons and caciques from nearby villages, as well as a master craftsman who performed a demonstration in marble carving, were also present.

The deputy congratulated Macael's city council, as well as the other institutions, entities, and volunteers who made this recreation possible, for their "resolute commitment" to the initiative, which strengthens Macael's ties with the entire marble province, which has been so important for the growth and progress of our country.

Gimenez also recalled that "from day one, we wanted to support the Macael City Council at this important recreation, at both the provincial and national level." This recreation is a highlight, not only because of the professionalism and quality of the costumes, extras and sets, but also because the entire town took to the streets to make this project a reality.

He also highlighted the potential for this proposal to be a tourist attraction. "It's an event that goes beyond the cultural aspect and becomes great opportunity for industry tourism, another excellence that visitors can find in the destination Costa de Almeria." It allows us to learn about one of the most important, authentically Almerian cultures and sectors: the marble culture. This is a way to understand life and should be included in the UNESCO World Heritage Site.

Macael's mayor stressed that they would continue to work on their recreation, reclaiming the unique Macael event. It is unique in that it was only held in Macael, and unlike other recreations. It was an attempt at privatizing the quarries in our municipality, which, to this day remain Macael's and are managed by the City Council.

Martinez said that Martinez was recalling that it was a 27-year battle of the people against power, with an end in favor of people that continues to this very day. We do it in a fun, gastronomic, and folkloric manner to show all that has happened over those years>> He thanked all his collaborators and sponsors for making this possible.

The mayor and deputy mayor used the opportunity to invite Almeria residents to meet Macael and to enjoy the time spent with him.

‹ ›
Keywords:
CanterosCaciquesMacaelRegresaEscenasReivindicarlaHistoriaMarmol
Your comment has been forwarded to the administrator for approval.×
Warning! Will constitute a criminal offense, illegal, threatening, offensive, insulting and swearing, derogatory, defamatory, vulgar, pornographic, indecent, personality rights, damaging or similar nature in the nature of all kinds of financial content, legal, criminal and administrative responsibility for the content of the sender member / members are belong.
Related News