Brazil is cut in two. 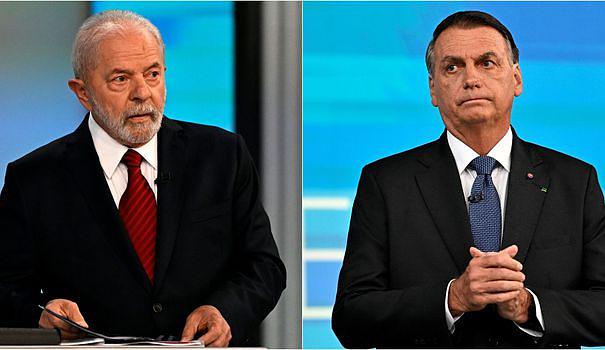 Brazil is cut in two. In this ultra-polarized climate, social networks carried torrents of misinformation and the candidates insulted each other copiously in front of tens of millions of viewers.

Brazilians often in a hurry "let's get it over with" go to the polls this Sunday from 8:00 a.m. (11:00 GMT) in the country of continental dimensions.

If the polls have been predicting for months a third term of four years for the former left-wing head of state Luiz Inacio Lula da Silva (2003-2010), the outgoing far-right president Jair Bolsonaro, 67, can still believe it after his unexpected score in the 1st round of October 2: 43% against 48% at Lula.

Bolsonaro, to whom the polls had given a dozen points behind, benefited from a dynamic between the two rounds, when the left seemed a little stunned.

Published on Saturday evening, the latest Datafolha poll can give Bolsonaro additional reason to hope: the gap is closing, with Lula winning 52%/48%. The margin of error is +/- 2 points and opinion polls have already been wrong.

"It's a lot tighter than anyone would have thought," Brian Winter, editor of Americas Quarterly, told AFP, "it's going to be a confusing election."

Will Bolsonaro accept the result on Sunday night if Lula is elected?

This is the big question.

After muting his incessant attacks on the "fraudulent" system of electronic ballot boxes, he recently denounced alleged irregularities in the broadcasting of his campaign's radio spots. On Friday, he claimed "whoever has the most votes wins" -- unconvincingly.

"Bolsonaro will question the result," said Rogerio Dultra dos Santos of the Federal University of Fluminense.

Many fear a Brazilian replica of the assault on Capitol Hill after the defeat of Donald Trump which could target, for example, the Supreme Court so often vilified by Bolsonaro.

The ex-captain can count on "the support of his most radicalized voters (...) and cause unrest", according to the analyst, who however does not see the armed forces embarking on a golpist adventure and underlines that democratic institutions are strong.

Trump, precisely, called on Brazilians to re-elect Bolsonaro, "a great guy", and especially not "Lulu (sic), this crackpot from the radical left".

But the former metalworker with an extraordinary destiny hoped that Bolsonaro "will have a moment of wisdom" and will call him if he wins "to recognize the result".

The campaign, however, was anything but “wise”. Bolsonaro insulted Lula: "thief", "ex-prisoner", "alcoholic" or "national disgrace". The latter returned the blows: "pedophile", "cannibal", "genocidal" or "little dictator".

Accusing each other of lying, Bolsonaro and, to a lesser extent Lula, fueled the disinformation machine, which worked like never before in Brazil.

Social networks - the sole source of information for the majority of the 170 million Brazilian users - have conveyed an unprecedented mass of false information.

With this dirty campaign, the real concerns of the population have been neglected: inflation, unemployment, poverty or hunger, from which 33 million Brazilians suffer.

The major challenge between the two rounds was the hunt for the 32 million abstainers from the 1st round (21%). By way of comparison, Lula obtained a six million vote lead on October 2.

Lula wants to protect democracy and make "Brazil happy" again, after two terms in which he lifted nearly 30 million Brazilians out of poverty but where the economy was booming.

Despite a term enameled by serious crises including that of the Covid, he retains a base of diehard supporters and has been able to impose his political line in the face of a barely audible left and a traditional right which has foundered.

If elected, Lula, a key figure in Brazilian politics for four decades, will make a spectacular comeback after experiencing disgrace in prison (2018-2019) and then the cancellation of his convictions for corruption.

He is the favorite of women, the poor, Catholics and the rural Northeast. But the men, the upper classes, the pro-arms, the business community and the evangelicals overwhelmingly vote Bolsonaro.

The next tenant of the Planalto Palace in Brasilia will have to deal with a Parliament even more to the right than before the legislative elections of October 2: the Liberal Party (PL) of Bolsonaro is represented in force.