Lola Chiclana, an athlete, will share her personal experiences with students at educational centers

Through the Women's Information Center, the City Council will create an activity for schoolchildren that aims to teach equality values, in this instance from personal experiences in sports. 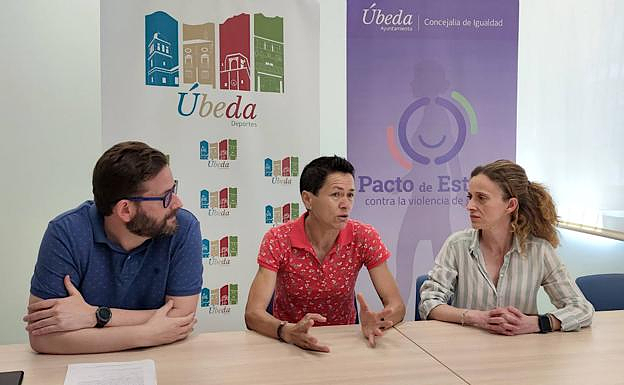 Through the Women's Information Center, the City Council will create an activity for schoolchildren that aims to teach equality values, in this instance from personal experiences in sports. Lola Chiclana, an athlete, will give her testimony to San Juan de la Cruz, Salesianos, and Juan Pasquau students. Some others are still to confirm that they have complied with this training in equality.

Francisca Isabel Millan (Councilor for Equality) explained that the idea was for the athlete to share her experiences in sports. She has been a world champion in the w40 half-marathon in 2018 and many other successes. The mayor said that She is a woman-referent and will tell his stories beyond his victories". She also noted that it attracts more attention from students when the stories are told in first person. This creates a stronger connection. She also recalled that Lola Chiclana's history was marked by "effort and perseverance, but also the inequalities and machismo she has experienced within sport."

She expressed her delight at the opportunity and said that the talks she will give to the students are very important. She will share her experiences in the sport from both her personal perspective and from the perspective her achievements. She admitted that she had suffered from violence and inequality in sport.

The athlete said that she wants to be remembered for her sporting achievements, and that she will also share with the students the struggle she went through to earn the recognitions. She noted that there is "a lot of inequity in sport." She concluded her remarks by reaching out the City Council of Ubeda to help with any issues in her locality. She added, "I'm willing to do whatever it takes to make our city a better place, especially when it comes to women and sports."

This activity is part the State Pact's activities that aims to encourage workshops for schoolchildren. The activity was originally scheduled before the pandemic but it was cancelled due to health concerns. It has now been resumed. It will examine issues such as education, equality, and sports. Pedro Jesus Lopez, the Councilor for Sports, stated that by combining these three pillars, a very interesting proposition will emerge for students with the basic objective of avoiding future inequality.

He also spoke highly of Lola Chiclana’s sporting career, and said that she was one of the city's "great bastions" in the field of sports and a great example for others both professionally and personally. She stated that Lola Chiclana's values and her radiating energy should be shared with schools. She acknowledged that it was a blessing for the city to have people in diverse disciplines who are able to value their experience, daily labor, self-improvement, and be a role model for others.

‹ ›
Keywords:
AtletaLolaChiclanaContaraExperienciaPersonalAlumnadoCentrosEducativos
Your comment has been forwarded to the administrator for approval.×
Warning! Will constitute a criminal offense, illegal, threatening, offensive, insulting and swearing, derogatory, defamatory, vulgar, pornographic, indecent, personality rights, damaging or similar nature in the nature of all kinds of financial content, legal, criminal and administrative responsibility for the content of the sender member / members are belong.
Related News