Local businesses can benefit from a return to school

Get started with the preparations. 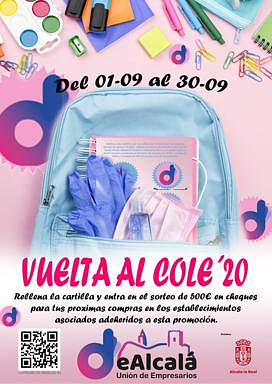 Get started with the preparations. The Union of Merchants of Alcala la Real announced that it will be running a back-to school campaign throughout September. This initiative has 40 participating establishments. It aims to not only support local merchants but also encourage local consumption.

According to the Merchants Union, the campaign is composed of the distribution of a promotional brochure among customers. This booklet must be completed by adhering six seals. The booklet will then be available in participating shops when you make a purchase. After the card is completed, you must enter it in one of the boxes that will be distributed to businesses.

After September's end, there will be a raffle at the headquarters. There will be prizes that correspond to vouchers for purchases in any participating shops. These vouchers will be worth 300, 100 and 50 euros. This campaign will award 500 euros worth of prizes.

This campaign includes businesses that directly relate to going back to school, such as books, stationery shops, clothing, or sports stores. However, this campaign also includes jewelers, opticians and computer stores, food stores. Computer stores can also be used to advertise or print technologies. This is a sign of the desire to unite to restore the local commerce that was once so important in the Sierra Sur and the nearby Alcala la Real municipalities.

A few days ago, the trade hosted the 'Open Night', in which various establishments participated. It consisted of opening the shops until 11:00 p.m. and promoting purchases by offering discounts, raffles, and entertainment on the main shopping streets.

‹ ›
Keywords:
VueltaColeApoyandoComerciosLocalidad
Your comment has been forwarded to the administrator for approval.×
Warning! Will constitute a criminal offense, illegal, threatening, offensive, insulting and swearing, derogatory, defamatory, vulgar, pornographic, indecent, personality rights, damaging or similar nature in the nature of all kinds of financial content, legal, criminal and administrative responsibility for the content of the sender member / members are belong.
Related News