The piano of Arcadi Volodos rang on Friday night at Santiago Hospital's auditorium. 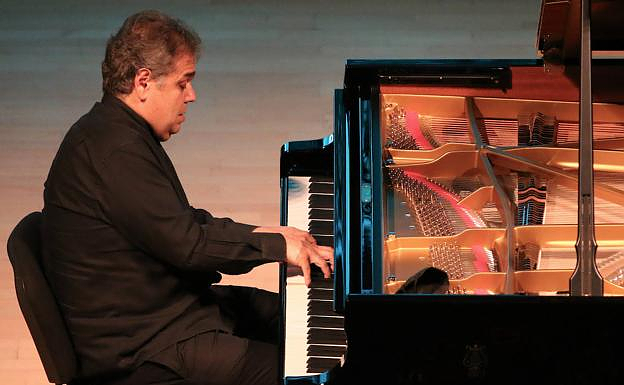 The piano of Arcadi Volodos rang on Friday night at Santiago Hospital's auditorium. It was part of a historic concert by Ubeda and the International Music and Dance Festival. This event will be remembered by many who attended. The world's best pianist was outstanding with a program that challenged his intellectual and emotional resistance and left unimaginable moments of subtlety and emotion.

After a memorable 2007 first visit, the master returned to the World Heritage City and chose Schubert and Schumann. This luxury selection is for the most demanding of ears. The renowned pianist is currently on a lengthy European tour and this was his first concert in Spain. It was a high-level artistic event that was enjoyed by the audience, making it one of the highlights of the current edition 'Ciudad de Ubeda,' which is also dedicated to the piano.

Arcadi Volodos, who just turned 50, is a genius because of his ability to combine extraordinary virtuosity and deep and expressive musicity. His creativity and talent as a performer have made him a global reference in classical music over the past decades. He has given recitals around the globe, including with some of the most distinguished orchestras and conductors, since his New York debut in 1996.

The Santiago Hospital auditorium dressed up for Olga Peretyatko's performance on Saturday. The audience was captivated by her performance and praised her for it.

The great classical music legend presented his latest project, 'Songs for Maya. She dedicates the album to her 2021-born daughter and shares the joy of motherhood. She performed a variety of lullabies in different languages and times, with the help of Semjon Skigin, her piano teacher. This helped to spread the message of brotherhood between peoples using the universal language of love. A mother singing to her child so that he falls asleep is the best kind of love.

The recital featured a wide range of repertoire, including works by Mozart, Gershwin and Tchaikovsky. Olga Peretyatko is one of the most highly regarded sopranos around the globe. She won Placido Domingo’s Operalia competition. She has performed on major international stages and collaborated with great directors. Her singing and recordings have won her numerous awards.

Three more moments were included in the third round of concerts at Ubeda Festival. He made a new appointment on Thursday for guitarists. The 2021 Intercentros Melomano Contest winner was announced by the Theater of La Cultural, Diego Martinez. This concert was part of the "Stage pro" cycle, which is dedicated to emerging artists. It was based on agreements the City of Ubeda has with various entities and competitions. It featured works by Rodrigo and Granados, Castelnuovo–Tedesco, Tarrega, Granados and Albeniz among others.

This recital was part the 'Music and Heritage’ cycle. It covers important and historic places within the World Heritage Site. This section also featured the concert that was held yesterday at noon to close this third week's music. Manuel Garcia Villacanas directed the Llama de Amor Viva Choir in the Minor Basilica of Santa Maria de los Reales Alcazares. Ubet's group performed the "Spiritual Canticle" with texts from Saint John the Cross, set to music by Manuel Garcia Villacanas. This work was preceded by some sacred pieces that were related to the theme or historical context.

‹ ›
Keywords:
SemanaNivelFestivalMúsicaArcadiVolodosOlgaPeretyatko
Your comment has been forwarded to the administrator for approval.×
Warning! Will constitute a criminal offense, illegal, threatening, offensive, insulting and swearing, derogatory, defamatory, vulgar, pornographic, indecent, personality rights, damaging or similar nature in the nature of all kinds of financial content, legal, criminal and administrative responsibility for the content of the sender member / members are belong.
Related News