Letter bomb to the Ukrainian embassy in Spain, a "light" injured

"The National Police was informed around 1:00 p. 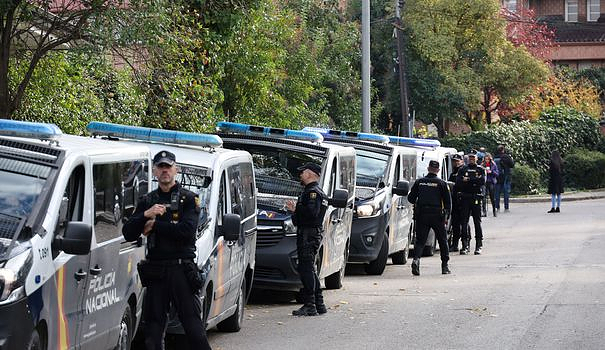 "The National Police was informed around 1:00 p.m. (12:00 GMT) of an explosion inside the Ukrainian embassy in Madrid. It occurred when one of the embassy employees was handling a letter" , said a police source.

“This employee was injured, a priori slightly, and he went himself to a hospital” to be taken care of, she added.

"The National Police has opened an investigation in which the scientific police are participating," said this source.

Spanish justice has opened a preliminary investigation into alleged acts of "terrorism", said a spokesperson for the High Court of the National Audience, competent in the matter.

According to AFP journalists, a security cordon has been set up around the embassy, ​​located in a residential area not far from the French school in Madrid. A police van notably blocked access to the street and many police officers and firefighters were deployed in the area. This cord was lifted shortly after 5:00 p.m. (4:00 p.m. GMT).

In a statement, Spanish Foreign Minister José Manuel Albares said he had contacted his Ukrainian counterpart Dmytro Kouleba, as well as the Ukrainian ambassador to Spain, to inquire about the injured employee's state of health and inform them of Spain's "support and solidarity" after this "attack".

Following the explosion of this letter bomb, Ukraine ordered "enhanced security" for all its embassies.

"The (Ukrainian Foreign Minister) Dmytro Kuleba instructed to strengthen the security of all Ukrainian embassies. He also called on the Spanish authorities to urgently investigate this attack," the ministry spokesman said on Twitter. Ukrainian Foreign Affairs, Oleg Nikolenko.

According to the prefect of the Madrid region, it was the security officer of the embassy who was hurt by this letter "addressed to the ambassador".

She was brought "by the postman in a normal envelope", said Mercedes Gonzalez on local television Telemadrid.

“The security officer, who is the person who usually opens the mail, opened the envelope in the garden of the embassy” when the explosion occurred, causing him “a small injury to his right hand” which “ doesn't matter," she added.

Since the start of the Russian invasion of Ukraine on February 24, the Spanish government of socialist Pedro Sanchez has sent aid to kyiv, including military aid or, more recently, in the form of electricity generators in the face of attacks against Ukrainian energy infrastructure.

Mr. Sanchez had traveled to kyiv in April to show his solidarity with the government of President Volodymyr Zelensky.