"There is a Supreme Court order to clear the roads. 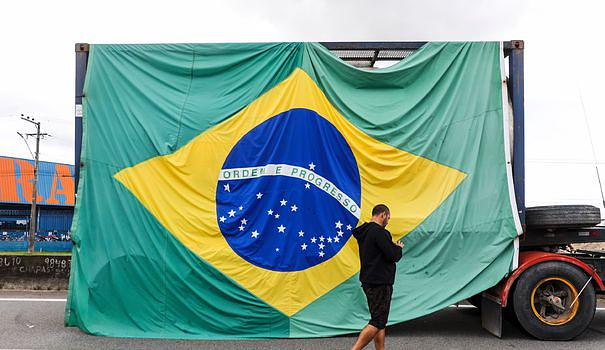 "There is a Supreme Court order to clear the roads... The federal traffic police cannot convince the truckers" and demonstrators, "it's inconceivable", says Rosangela Senna, a 62-year-old real estate agent who waiting for a hypothetical coach departure at the bus station.

"I was able to pay for a night in a hotel but a lot of people had to sleep here," she adds.

Roadblocks intensified on Tuesday in Brazil, two days after Lula's election as president by a narrow gap (50.9% against 49.1% for Bolsonaro).

Calls to support them have multiplied on Twitter and in pro-Bolsonaro groups on Telegram, AFP's digital investigation team has found.

The federal road police (PRF) reported 267 roadblocks, total or partial, at midday, in at least 22 of the 27 states of Brazil. According to general manager Anderson Torres "some 200 roadblocks have already been lifted".

On Monday evening, a Supreme Court judge ordered the "immediate unblocking of roads and public thoroughfares" and asked the Federal Highway Police (PRF) to take "all necessary measures".

The highway leading to Sao Paulo's Guarulhos International Airport, the largest in the country, was reopened to traffic after police intervened. Its early morning blockage caused some flights to be delayed or canceled, according to local media.

"I made a reservation for a flight at 9:20 am, I am with my disabled wife and we could not board because they canceled our flight", complains to AFP-TV Marlon Santos, 51 year.

In Sao Paulo, a sign hung above an overpass bore the inscription "Lula non!". The federal traffic police asked the demonstrators to leave but the latter refused to move and sat down on the ground, blocking three lanes of traffic on the banks of the Tietê river, noted an AFP journalist.

"We have been here since yesterday, there have been up to 500 people but people are going to rest and come back," Jeremias Costa told AFP-TV.

The action he is taking is "in connection with the election, with the future of Brazil, that of our children", he said, adding that he was "impatiently awaiting a reaction from him (Jair Bolsonaro), but it is independent of his person, it's not for Bolsonaro, it's for Brazil, for democracy".

It is in the south of the country, as in the state of Santa Carina where Jair Bolsonaro won nearly 70% of the votes, that the most numerous roadblocks are identified.

On one of them in Palhoça, the situation is tense and the PRF is negotiating with the demonstrators so that they lift their blockage smoothly, noted an AFP journalist.

In Brasilia, the police have restricted since Monday evening the access of vehicles to the Square of the Three Powers, where the Presidential Palace, the Parliament and the Supreme Court are located, close to the immense esplanade of the ministries, place of assembly in the capital city.

This “preventive” measure was taken “after the identification of a possible demonstration convened at this place on social networks”, had indicated the secretariat of Public Security of the federal district of Brasilia.

A call to demonstrate "Brazil will not be a Venezuela" was launched on Bolsonarist networks, reproducing the words that Senator Flavio Bolsonaro, dedicated to his father, tweeted on Monday: "Bolsonaro, we are with you".

More than 36 hours after the official results, the outgoing president has still not recognized his defeat.