"Let him return to Africa": the Assembly is considering sanctions against an elected RN

The office of the Assembly, its highest collegiate body, meets at 2:30 p. 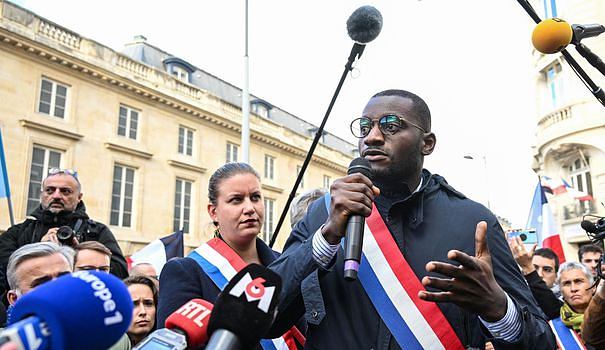 The office of the Assembly, its highest collegiate body, meets at 2:30 p.m.

In both cases, the office's proposal must be approved by a sitting-standing vote of the Assembly, which would take place at 3:30 p.m.

Nupes and the presidential camp plead for the "heaviest" sanction. "The question of his resignation arises", launched the Minister of the Interior Gérald Darmanin on Friday on BFMTV and RMC, adding that he would sign a petition from the Renaissance group demanding his departure. LFI and the Greens are also asking for the resignation.

At the initiative of LFI, a rally in support of the targeted Insoumis deputy, the black elected official of Val d'Oise Carlos Martens Bilongo, was held at midday near the Assembly, bringing together a few hundred people. .

"My person was attacked but also people who look like me. Millions of French people were attacked yesterday. In 2022, we must not give way to these ideas", affirmed Carlos Martens Bilongo, surrounded by elected left and by Jean-Luc Melenchon.

Thursday, it was during a question to the government of the deputy Insoumis on the "drama of illegal immigration" that resounded in the hemicycle a "Let him return to Africa", launched by Grégoire de Fournas and transcribed in the meeting report.

The RN assures that its deputy was talking about the humanitarian "boat" Ocean Viking, mentioned earlier by Carlos Martens Bilongo, and in "no case" of the deputy himself.

On BFMTV on Friday, Grégoire de Fournas, who "assumes his remarks on anarchic migration policy", accused Mr. Martens Bilongo of having "felt a blow to play in community victimization".

Carlos Martens Bilongo claims him "the heaviest sanction" against a "racist sentence" from an elected member of a far-right party who "has never changed".

"Would it have been more acceptable" for the words of the RN to be addressed "to the refugees on the SOS Méditerranée boat in a critical situation?", He wondered the day before.

He received the support of all the other benches. The words of Grégoire de Fournas deeply shook the Assembly on Thursday, with deputies gathered en masse at the foot of the perch to demand sanctions - an unprecedented scene.

President Yaël Braun-Pivet prematurely put an end to the session of questions to the government, an extremely rare decision, because of the "seriousness of the facts" and "legitimate emotion".

Winegrower in the Médoc, Grégoire de Fournas is the author of tendentious tweets. "In Africa, they all love France and its allowances. We welcome all of Africa?!", He tweeted in 2017; and in January 2022: "In response to the expulsion of our ambassador to Mali, all Malians must be expelled from France!". The elected official defended himself on Friday for having deleted other messages.

His exit weakens the notabilisation strategy claimed by the troops of Marine Le Pen, since the unprecedented election of 89 RN deputies in June.

The far-right group had already created controversy when the dean of the Assembly José Gonzales had immediately praised the French Algeria of his childhood on June 28, or during a stormy session where two RN deputies had treated the Minister of the Economy Bruno Le Maire as a "coward" and that of Education Pap Ndiaye as a "communitarian", with calls to order in the key.

On Monday, RN deputy Alexandra Masson had also aroused the indignation of the left by considering in the hemicycle that the rescuers at sea were intended to "save lives" and not to "fetch more and more migrants".

If Grégoire de Fournas receives a temporary exclusion, he would be the second deputy thus sanctioned after the elected PCF relative Maxime Gremetz in March 2011, for an altercation because of … ministerial cars, badly parked according to him.

The last "simple censorship", therefore less, dates back to 1984. The right-wing deputies Jacques Toubon, Alain Madelin and François d'Aubert had been sanctioned for having "questioned the past of the President of the Republic" François Mitterrand .