League of Nations: Italy consoles itself by joining the final four

Giacomo Raspadori (27th), already decisive against the English (1-0) on Friday, and Federico Dimarco (52nd), author of the 1,500th goal in the history of Italy, ensured the victory of the Nazionale against Hungarians who only needed a draw to finish in the lead. 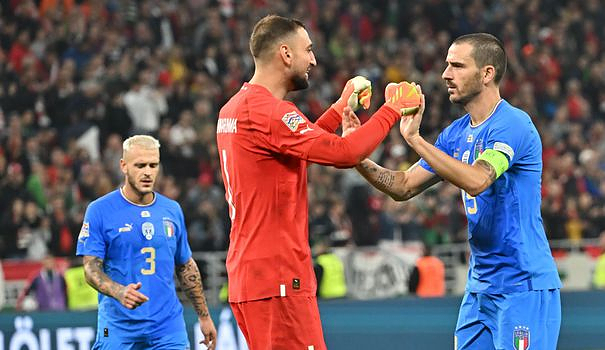 Giacomo Raspadori (27th), already decisive against the English (1-0) on Friday, and Federico Dimarco (52nd), author of the 1,500th goal in the history of Italy, ensured the victory of the Nazionale against Hungarians who only needed a draw to finish in the lead.

Roberto Mancini can also thank a Gianluigi Donnarumma who has become solid again, author of two "miracles" on his line just before the Italian 2-0 in front of Ádám Szalai (50th) then just after on a header from Callum Styles (55th).

Italy joins the Netherlands and Croatia, first qualified for the "Final 4" scheduled for June 2023. Spain or Portugal will compete on Tuesday for the last ticket to succeed France, who did not qualify.

Italy, which fell to their lowest point in March less than a year after their Euro title, missing out on World Cup qualification for the second time in a row, found some teeth against the Hungarians badly entered the meeting.

Goalkeeper Péter Gulácsi was first close to scoring against his side (5th) but was saved by a defender. But the second defensive approximation was too much: on a badly supported back pass, Wilfried Gnonto preceded the exit of the Hungarian goalkeeper and Raspadori, on the lookout, took the opportunity to quietly open the mark (27th).

The young Neo-Neapolitan, with his fifth goal in Nazionale, confirms his rise.

Hungary then finally showed a little more enterprising but Attila Szalai was clumsy in front of the deserted cage of Gianluigi Donnarumma (41st).

After Dimarco's second Italian goal, his first for the national team from a cross from Bryan Cristante, Hungary went all out with the support of their fiery supporters. But without making Donnarumma tremble, with regained confidence. The PSG goalkeeper was again perfect on a new attempt by Styles deflected by Leonardo Bonucci (63rd), disgusting the Hungarians for good and offering a little blue sky to the tifosi deprived of Qatar.