Laughing gas: the amazing success of this "legal drug"

Contrary to what one might think, laughing gas is a very serious subject. 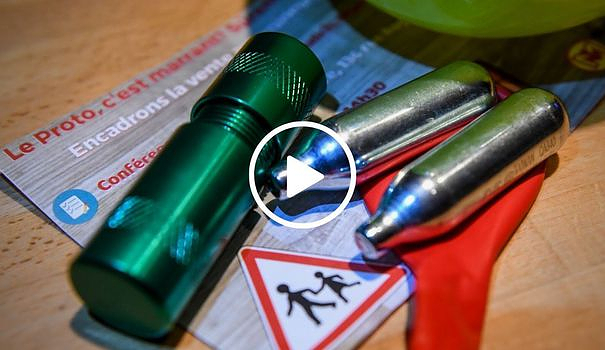 Contrary to what one might think, laughing gas is a very serious subject. Initially, nitrous oxide was used in medicine as an anesthetic, or in the kitchen for making whipped cream siphons. But for some time, these small silver capsules have also been popular with young people... And for a completely different reason: it is the third most consumed psychoactive substance among students. Once the gas is released in a balloon, then inhaled, the "proto" causes uncontrollable laughter for two to three minutes.

But the health complications are less encouraging. As the trafficking of nitrous oxide intensifies, the victims multiply. To the point that nearly 500 reports linked to nitrous oxide were recorded in 2021, ten times more than in 2019 .

If the "proto" is so successful, it is also because its consumption is completely legal. To obtain it, nothing could be simpler: nitrous oxide is on sale for a few euros in the supermarket. A headache for the State, which seeks to regulate its use. Since 2021, a law prohibits its sale to minors, as well as in tobacconists, bars and nightclubs.

In response, the traffic has adapted: no more "monodose" capsules, young people now prefer carboys - enough to inflate a hundred balloons - ordered in a few clicks on the internet. L'Express takes stock of the explosion in the traffic of this "legal drug".