Last tribute to the Queen, before dawn, in an English pub in Washington

They are around thirty customers who braved the very early hour to be present at this solemn appointment, before going to their place of work. 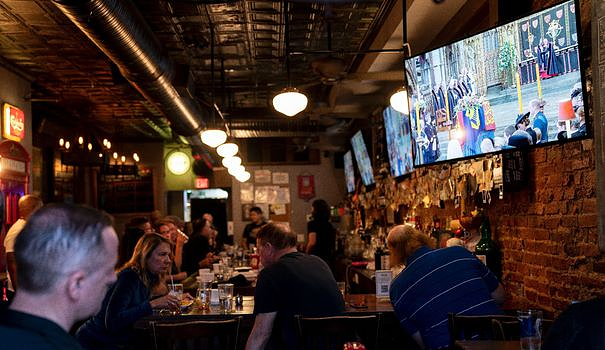 They are around thirty customers who braved the very early hour to be present at this solemn appointment, before going to their place of work. Some are Americans who are fans of the royal family, others are authentic Britons.

A few women sport a floral dress and an elegant hat, some consumers wear a dark shirt and tie, and still others a decidedly more casual football shirt.

"It's huge, the loss of our Queen, and we want to mark the time of her funeral and show our respect," says Julie Muir, 41, an American-British whose family is from Watford, north London. .

“Mine follow the news of the royal family in a religious way. Often about the dramas and the problems which concern them. But, today, everything revolves around this wonderful woman, her life, her sense of duty, we must say goodbye to him", she continues.

For this historic occasion, the pub has obtained a special dispensation allowing it to serve spirits at such an unusual time, due to the time difference between London and Washington.

Among the cocktails on offer is of course the "Queen's Tipple", reputed to be the late monarch's favorite drink: a mix of Dubonnet vermouth and Beefeater gin, garnished with a slice of lemon.

"A lot of people were surprised by their own reaction to his death and their sense of loss," said restaurant owner Roneeka Gordon, a Liverpool native.

"We wanted to provide a space where those in mourning could follow the funeral in communion with others. It is hoped that British food and traditional ales will provide additional comfort to our customers."

Strapped into an impeccable US Navy uniform, DeLorean Forbes, a lawyer engaged in the US Navy, ordered himself a "full English breakfast": sausages, bacon, eggs, toast, mushrooms, tomatoes and the inevitable white beans cooked in tomato sauce.

"It's a once-in-a-lifetime event and I wanted to be here with some British friends," he said, holding up his cup of coffee.

"My mother is a huge fan of the monarchy. I really admire the beauty of the ceremony today, its pomp and pomp. I know the importance of the alliance between our countries and, as a sailor, I am happy to see that the Royal Navy is transporting the coffin," he added, referring to the Royal Navy's horse-drawn gun carriage used at the royal funeral.

The Queen Vic takes its name from Queen Victoria, whose reign lasted 63 years, until 1901.

Opened 12 years ago not far from Capitol Hill, it offers typical English beers, such as London Pride and Bombardier, as well as "fish and chips" or sausages and mash.

"It's not often that I get a drink at this time," says neighborhood resident Jen Barrie. "It's simply extraordinary to see and hear this funeral. So I asked my husband to drop the children off at school this morning", adds this American wearing boots adorned with the Union Jack.