The Summer Nights: Cinema program has been launched by the Festivals and Youth sections of Las Gabias Town Hall. 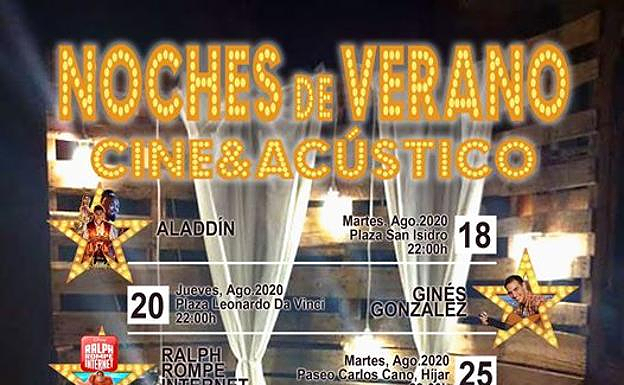 The Summer Nights: Cinema program has been launched by the Festivals and Youth sections of Las Gabias Town Hall.

On Tuesday, August 18, at Plaza San Isidro, the film Aladdin will be shown. Gines Gonzalez will then be showing at Plaza Leonardo Da Vinci on Thursday 20, at 20:20. Ralph Rompe Internet will be performing at Paseo Carlos Cano de Hijar on Tuesday, the 25th. Frozen II will be shown at La Canada de Gabia Chica Park on August 31. Cristian Delgado will be showing on September 3. Dumbo will screen in Plaza del Fuerte on September 1, and Luni Ruiz will end the party at Pedro Verde Viewpoints on September 8. All Summer Nights shows at Las Gabias are at the same time at 10:00 p.m.

‹ ›
Keywords:
NochesVeranoCineConciertosGabias
Your comment has been forwarded to the administrator for approval.×
Warning! Will constitute a criminal offense, illegal, threatening, offensive, insulting and swearing, derogatory, defamatory, vulgar, pornographic, indecent, personality rights, damaging or similar nature in the nature of all kinds of financial content, legal, criminal and administrative responsibility for the content of the sender member / members are belong.
Related News