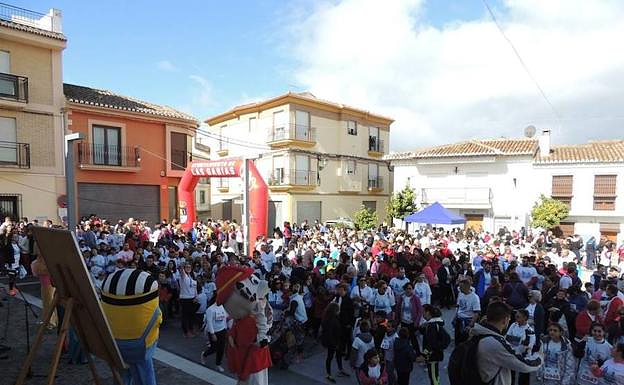 After last year's huge influx, the Agora de Las Gabias Youth Association organized the II March of Solidarity with Agora. This event will be repeated in 2019. This activity is intended to raise as much money possible to send to the Spanish Association Against Cancer. All proceeds will go towards fighting childhood cancer. This march will be supported by the Las Gabias Town Hall as well as several local businesses. There are only a few places left.

This solidarity event has been a huge success since last year, hundreds of gabirros joined the effort to raise as much money for this cause as possible. Participants will be gathered at 11 AM on Sunday at Plaza de Espana, Gabia Grande. More than 2000 participants are expected to travel 5 km through the streets of the central part of the municipality. In exchange for their bib numbers, each participant will receive a commemorative T-shirt and a plate with paella. The City Council will pay for the cost of the event.

Vanessa Polo, the mayor of the village, stated that the march was designed to allow entire families to participate. They can donate one euro and they hope to have more than 2,000 participants. For those who are unable to obtain a number but still want to contribute, the Agora Youth Association established a zero number. Forecasts indicate that there is a possibility that more than 6,000 euros could be collected this Sunday.

We express our deep gratitude to the Agora Youth Association, for the creation of this initiative. Also, we thank the citizens of Las Gabias, for their support. The mayor said that he hoped this Sunday's march would be a huge success and raise as much money as possible to fight childhood cancer.

‹ ›
Keywords:
GabiasRealizaSemanaMarchaSolidariaCancerInfantil
Your comment has been forwarded to the administrator for approval.×
Warning! Will constitute a criminal offense, illegal, threatening, offensive, insulting and swearing, derogatory, defamatory, vulgar, pornographic, indecent, personality rights, damaging or similar nature in the nature of all kinds of financial content, legal, criminal and administrative responsibility for the content of the sender member / members are belong.
Related News