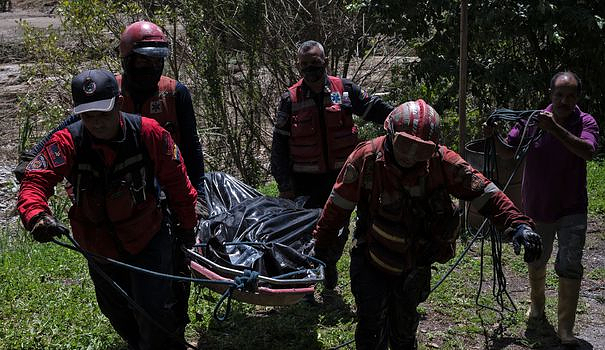 Forty-three bodies have been found and "there is still a significant number of missing people: 56 missing people. We reach almost a hundred victims who have died in this tragedy, this natural disaster", said Venezuelan President Nicolas Maduro on state television VTV on Tuesday night.

The Venezuelan army tweeted images of the airdrops of food, indicating that "people are receiving food and water in the most remote places through helicopter drops".

The authorities have started to clean the streets and partially restore electricity and water services, but the task is still important.

The floods of mud swept away everything in their path: trees, rocks, cars, streetlights, telephone towers and whole sections of houses, many of which were built in risk areas. The city of 50,000 inhabitants spills over the sides of the mountains.

Maria Romero waits in an elementary school that serves as a shelter. She has lost everything and is waiting to be relocated. "It's no longer Tejerias, it's a disaster", summarizes this 60-year-old housewife who took refuge here with her family - seven people in total.

This is a first step before their transfer to other reception centers in neighboring towns. "We were quiet at home (...) and when we went to see, it was too late, the water was there," she told AFP on Wednesday.

The family got out of the house as best they could. The current was so strong that they clung to a tree trunk wedged between two walls of a nearby hardware store. Her husband began to bring up the three children, one by one, then the adults. Maria remembers being paralyzed with panic and unable to get up.

- The smell and the flies -

At school, there is water, food, clothes and toys. Children are running everywhere.

Eighteen families have arrived in this shelter since Saturday, but most have already left for La Victoria, about twenty kilometers away.

The school also serves as a census center and survivors can request an inspection of their home to determine if it is habitable.

"I don't want to leave Las Tejerias because I'm used to living here, but if I have to leave, I'll leave," says Deyanira Blanco, 37, resigned, after arriving at the shelter to request an inspection of her accommodation. In the meantime, she lives with a friend.

Not far away, neighbors joined in the search efforts, digging up the mass of mud, branches and stones. The smell and the presence of flies serve as guides. Some people point to where they think they last saw a missing relative, hoping to find them.

Gabriel Castillo, 32, runs in tears through the village. He has no news of his mother, his partner and a cousin who lived with him in a house built on the banks of one of the five streams that came out of their beds.

He went to a nearby hospital to check the list of survivors, but they weren't there.

“When I came to present my case, they offered me food, but I don't want food, what I want is for my family to come back,” he says.

This landslide is Venezuela's worst natural disaster since the turn of the century.

President Nicolas Maduro has promised to rebuild homes and businesses, but the destruction is such that it will take time. Maria wants a place to live. "All in my house is mud," she says.