La Zubia's mayor calls out the PP spokeswoman for being a "political arsonist" and "lying and generating alarm."

Puri Lopez, the mayor of La Zubia has accused Inmaculada Hernandez of creating social alarm and "consciously lying" to neighbors by calling a demonstration in support of a 400% increase in the water bill, "which is completely false. 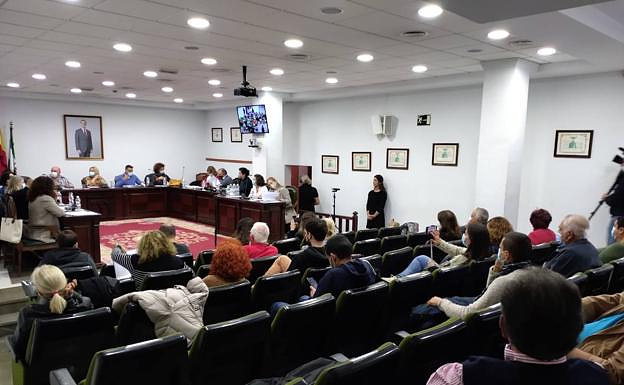 Puri Lopez, the mayor of La Zubia has accused Inmaculada Hernandez of creating social alarm and "consciously lying" to neighbors by calling a demonstration in support of a 400% increase in the water bill, "which is completely false." It is completely unacceptable that a political representative who also served as mayor of the municipality lies to the Zubienses to try to obtain electoral revenue, demonstrating yet again that she is a true politician arsonist." Lopez stated at the end of the extraordinary plenary session held on November 4, to make it clear to the public that the water bills will not rise.

The PP of La Zubia called a demonstration in the municipality that morning "based on two lies": that the City Council had ceded the entire water cycle to Sierra Nevada-Vega Sur Consortium, which is totally false, and that water bills are going to increase, which it is. Lopez stated that the City Council has a contract until 2027 with Emasagra, who is responsible for our drinking water supply. This will continue no matter what lies Mrs. Hernandez continues to repeat."

The councilor stated that the Consortium would be given the power to discharge water and purify it. Many of their neighbors have bad odor problems and La Zubia is still without purification.

This is the truth, not the fiction Mrs. Hernandez creates to confuse and annoy neighbors. Emasagra will continue to manage the water supply in La Zubia, just as it has done since 2001. This will continue until 2027. The mayor argued that if nothing has changed, then why would the water bill rise."

According to the mayor, "because the PP doesn't mention this in its media conferences", the City Council of La Zubia found out that when he requested to rejoin the Sierra Nevada Vega Sur Consortium to manage discharges, he had never left the entity because the previous government team left a substantial economic debt>>. Lopez clarified that we don't have to join because we never left.

La Zubia's mayor, Inmaculada Hernandez, sent a message of calm to the people in opposition to "an absolutely irresponsible attitude by the PP, that at a very difficult moment for many families intends sow more uncertainty. She stated that the water bill will rise, while Inmaculada Hernandez is fully conscious that she lies to our neighbors>>.

The mayor stated that residents can review their water bills month-by-month, starting now and ending in 2027 to see if it has increased.

‹ ›
Keywords:
AlcaldesaZubiaTachaPortavozPiromanaPolíticaMentirGenerarAlarmaSocial
Your comment has been forwarded to the administrator for approval.×
Warning! Will constitute a criminal offense, illegal, threatening, offensive, insulting and swearing, derogatory, defamatory, vulgar, pornographic, indecent, personality rights, damaging or similar nature in the nature of all kinds of financial content, legal, criminal and administrative responsibility for the content of the sender member / members are belong.
Related News