La Zubia presents Inmaculada Montalban, a magistrate, with the March 8 Prize for Equality

Inmaculada Montalbann, the magistrate of High Court of Justice of Andalusia and candidate to fill one of the vacancies at the Constitutional Court, has been awarded the March 8 Prize for Equality by the City Council of La Zubia in a ceremony that took place on Saturday 6th November at the Carlos Cano Cultural Center. 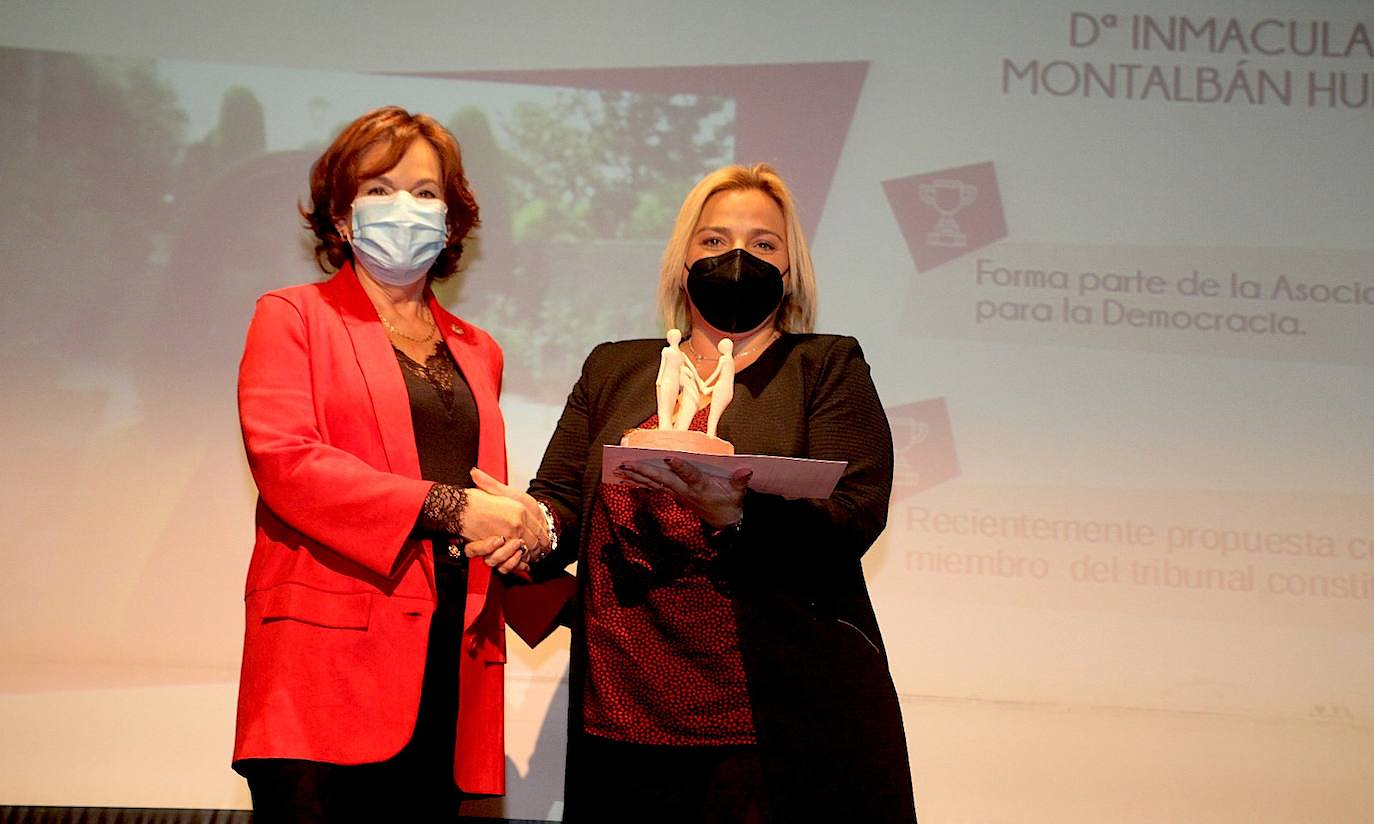 Inmaculada Montalbann, the magistrate of High Court of Justice of Andalusia and candidate to fill one of the vacancies at the Constitutional Court, has been awarded the March 8 Prize for Equality by the City Council of La Zubia in a ceremony that took place on Saturday 6th November at the Carlos Cano Cultural Center.

Montalban was awarded this award for "being a benchmark in judicial field, combating gender violence and raising awareness of women’s inequalities throughout his professional career", according to Rebeca Sanchez, Councilor for Equality of La Zubia.

She expressed her delight at being awarded this award by La Zubia's city council, which has worked for decades to promote the role of women in society. Montalban stated that this recognition was another reason to work and fulfill the constitutional mandate for equality between men and women, without any wage gap or unjustified difference.

Montalban thanked La Zubia's City Council for their recognition and expressed admiration for "a town that has made equality the engine and key to social development."

La Zubia also recognizes women who are exemplary in equality and have made a difference in various fields. Carolina Garcia Vargas was a futsal player, coach and founder of a women's futsal school in La Zubia in 2013. Her goal is to promote and disseminate this sport among girls.

Maria del Carmen Galvez Garcia won the health category. She was recognized for her role as director at El Balcon de Zubia during the pandemic, and her leadership as head of management in the "most punished by covid-19".

Francisca Puerta Laguna was awarded the equality coordinator at the IES Laurel de la Reina. She has challenged the false beliefs and taboos that surround gender in society.

The Carlos Cano Cultural Center, with the winners / IDEAL

It was awarded to Al Borde de lo Inconcebible, an association that has been dedicated to learning about the environment since 2004. They have contributed, through their annual conferences, to making women's role models in sports mountains as well as to valuing women's contribution to the conservation and care of the environment.

Carmen Romera Fernandez was awarded the Outstanding Person in Defense of Equality Award. Poder Alternativo received the award for feminist women’s associations. "For her tireless struggle for equality in La Zubia, and against violence throughout the province, she won the award."

The City Council awarded Alicia Choin (poet, writer, resident of La Zubia) the Cultural Award. In the category of people and entities that stand out against gender violence, it gave the award to the 8M Platform as well as the 25N of Granada.

The prize for people or groups that promote social cohesion and interculturality was won by members of La Zubia Voluntaria. Teresa Fernanda received Garcia Fil and En los Bordes Zubian artistic group En los Bordes in the category of people and groups that support equality and promote diversity. Maria Victoria Rubio Luque was awarded the prize for individuals or entities in business and create of opportunities. Maria Victoria Rubio Luque is an enterprising woman who runs a rural house in La Zubia since many years.

Puri Lopez, the mayor of La Zubia who presided over this event, said that these award-winning women groups and individuals "are a true reflection in which all society must look at themselves, because each of them has raised the flag in their respective fields for years of equality."

‹ ›
Keywords:
ZubiaReconoceMagistradaInmaculadaMontalbanPremioMarzoIgualdad
Your comment has been forwarded to the administrator for approval.×
Warning! Will constitute a criminal offense, illegal, threatening, offensive, insulting and swearing, derogatory, defamatory, vulgar, pornographic, indecent, personality rights, damaging or similar nature in the nature of all kinds of financial content, legal, criminal and administrative responsibility for the content of the sender member / members are belong.
Related News